Hi everyone. In this post I’ll try to paint a picture of the first few days, from arrival in Kathmandu to departure from Jomsom.

These 3 days will begin with frantic last-minute sorting-out, the purpose of which will hopefully become clear in later posts. We then have a 2-stage transfer from the delicious madness and furore of Kathmandu to what I am increasingly coming to think of as ‘the frontier’ at Jomsom via Pokhara. From Jomson we step into the outback.

Tue 1 Nov. Following an overnight flight from London and a short flight-change at Delhi I should arrive at Kathmandu’s Tribhuvan airport at 14:15 Nepal time. By then the clocks at home will have ‘fallen’ back an hour so I think I will land 5hrs 45mins ahead of UK at the time I would otherwise be joining the rush hour on London’s tube network – 08:30. With any luck my bags will appear without too much delay and I will be on my way to Thamel, the most fun and interesting part of Kathmandu in my view. Thamel is the centre of the tourist district and is a commercial area with myriad shops selling everything an ill-prepared trekker might need. Hopefully this particular trekker will not be ill-prepared but there is always something that is remembered just after you leave home on a trip. At least that is my experience. The picture below shows Thamel as I have never seen it. It is normally rammed with colourful people, cars, motorcycles, bicycles and cattle all vying for space in a maelstrom of magnificent bustle and it’s accompanying cacophony. I can only assume this photo was taken very early in the morning. I will join the throng to acquire several known must-have’s. A tent for one – lightweight essential! A local SIM card for my iPhone. A selection of boiled sweets, dried fruit, nuts and chocolate bars with which to keep the digestive fire stoked if rations run low or prove unpalatiable in the depths of altitude sickness. Finally I need a stove and fuel on which to cook – a skill which has largely escaped me hitherto but which I had better learn quickly. Doubtless I will be temped by other goodies such as the socks I should have packed but didn’t or a jacket to replace the wonderful Rab Lite Alpine softshell I left on the plane. Yep – been there! Finally I suspect a burger and chips and a beer or two at the Northfield Cafe and Jesse James Bar might be necessary. It would be churlish to pass it by I am a fan of Pete McCarthy’s edict coined during his excellent and hilarious book ‘A Journey of Discovery in Ireland’: “never pass a pub with your name on it’! Tim also recommends Sam’s Bar in Thamel. While neither of us are called ‘Sam’ I could make an exception…

Good times aside an early night will be required as it will have been a long day and we have an early start the following day when we transfer to Pokhara. 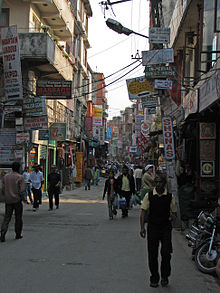 Wed 2 Nov. It is not possible to fly direct from Kathmandu to Jomsom and the overland journey would take too long. Our sherpa support team will travel overland as they will have had longer to prepare and, frankly, are more used to the driving in these parts which may be best described as a bit of a lottery. From the safety of a side alley the fact that drivers use their horns as a kind of ‘language of the road’ seemingly being conducted as a symphony by the smartly turned-out but largely ignored traffic police may be fun to see. Being part of it would require a degree of understanding unlikely to be gained after an afternoon in Thamel. What is more towards Jomsom the road is prone to landslides and flooding, so we Western newbies will fly, via Pokhara. That is a most agreeable option as Pokhara, Nepal’s second city and located 125 miles west of Kathmandu, is a gem. I have never been, but Lonely Planet says of Pokhara: “Far from the earthquake epicenter, and almost unaffected by the disaster, Pokhara ticks all the right boxes, with spectacular scenery, adventure activities, and accommodation and food choices galore. Whether you’ve returned from a three-week trek or endured a bus trip from hell, Lakeside Pokhara is the perfect place to recharge your batteries. The scene is a chilled-out version of Thamel, stretching along the shore of a tranquil lake with bobbing paddle boats. From the lake, and possibly even from your hotel bed, you can enjoy a clear view of the snow-capped mountains, just twenty or so kilometres away.” Well, maybe we won’t have a chance to experience all of that – we’re only there for 1 night. But we can try! The photo montage below from Wikimedia shows Top: View of the Annapurna Range from Pokhara; Center: Panorama of Pokhara; Bottom from left: Pokhara Valley, the Talbarahi Mandir in Phewa Tal, World Peace Pagoda in Pokhara

Wed 3 Nov. Today we say farewell to the glorious Pokhara and head to Jomsom on the one-a-day plane. Also known as Dzong-Sampa or New Fort, Jomsom is a compact small town (some might call it a large village) located at an altitude of about 2700m in the Annapurna mountains. It extends over both the banks of the Kali Gandaki River and is a useful final staging post by air. The picture below is of Jomsom airfield.

In fact Jomsom isn’t actually in the Dolpo region but is in Mustang, but it’s close enough for our purposes and we enter Dolpo almost as soon as we leave Jomsom and start our trek the following day. Maybe from the photo below you can see why I suggested a similarity to ‘the frontier’? On the bright side there are a number of shops selling the items trekkers normally would want from chocolate bars to trekking poles. All hotels have attached restaurants with comprehensive menus and as the food tends to subsidise the room cost we will need to eat where we are staying or they will increase the room rate! I’m sure it will be fine, especially as it will be our last sleep in a bed for nearly 3 weeks.

Thu 4 Nov. Provided everyone is feeling good and our support sherpas arrived safely by road we will ship out on the trek. We will head north out of Jomsom following the Kali Gandaki River valley towards Kagbeni. I mentioned a number of route uncertainties in my blog on Monday and the first appears immediately. At this stage we don’t yet know whether we shall stop the first night around Kagbeni after a relatively short and easy day to allow a little extra time for acclimatisation before heading to the mountains, or whether we should head straight up. The current plan is the latter and I shall work on that basis in my next blog which will cover the first 5 days on the trek itself.

2 thoughts on “Getting to the start line”