The excitement is building. With 3 weeks to go until I leave for Kathmandu on the evening of Monday 31st October I thought you might be interested to know the route we plan to take on the trek. There are still some details to sort out, caused mainly by the lack of agreement between various mapping sources on the naming of the some of the villages we plan to visit, but the core is agreed.

The pictures below show where the Dolpo region is in Nepal as a whole and where it is in comparison with Kathmandu and other significant places and the countries to the north and south of Nepal. As can be seen, Dolpo is in the northwest part of Nepal, on the border with China (Tibet). 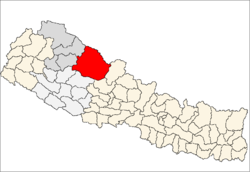 We shall trek from Jomsom in the east to Jumla in the west staying fairly close to the northern border. We plan to depart Jomsom on Friday 4th November and are targeting arrival at Jumla 20 days later on Sun 24th. I calculate the distance as roughly 240 miles meaning we need to average 12 miles a day. In reality some days will be shorter, especially in the first few days as we acclimatise while also seeking to cross our first two 5000m+ (over 16,404ft) passes on day 4. These are the huge Jungben La at 5550m (18,209ft) and the only slightly lower Niwas La at 5120m (16,798ft). ‘La’ means ‘pass’ in Nepali. Given that we shall also need a few rest days to recover from the inevitable strains and injuries, the average distance trekked per day will need to be more than 12 miles. That’s quite a distance with height to gain and, ironically but logistically necessary, the toughest days are in the first week out of Jomsom.

Should it all prove a challenge too far there are options to cut the trek short via an ‘escape’ route. These opportunities arise at about the half-way point. Firstly after around 110 miles at Saldang and again 15 miles later at Bhijer. From both of these villages we can take a route south via Lake Phoksundo to the airports at Dunai, the administrative capital of the Dolpo, or nearby Juphal thus reducing the total distance trekked from 240 miles to around 170. These distances are yet to be verified but are in the right ballpark. I should mention that the distances are calculated based upon the sum of the straight line waypoint-to-waypoint distances, plus 25% to take account of the fact that we won’t be going in straight lines. Using Google Earth in conjunction with the best mapping I can get, from Jomsom to Jumla I have placed 421 waypoints. The total straight line distance from waypoint D421 (Jomsom airfield) to D001 (Jumla airfield) is 192 miles. Adding 25% leads to an estimated total distance of 240 miles. 25% may prove to be too much or too little. We won’t know until we do it and track the distance by GPS (hopefully).

Over the next few blogs I will go into more detail of the places we will visit or pass each day, where we plan to camp at night and the type of terrain we expect to be on. The next instalment will cover getting to Jomsom and the first day or two of the trek. In the meantime I hope the 2 pictures below give an indication of the general direction and key places.

The first is a screenshot of the route against a background of Google Earth in a 3D perspective slant from an imaginary spacecraft 75 miles above the earth. This shows every waypoint planned. The main route waypoint numbers are prefixed ‘D’ while the escape waypoints are prefixed ‘E’. Waypoints of significance have a name associated with the number. Unfortunately the size of the waypoints and their labels obscure much of the interesting satellite photo view but I will show this in smaller sections in a later blog. The point is that you can see the general lay of the land and our route across it.

The second is cleaner, showing the route as presented by Garmin’s BaseCamp application drawing mapping and route data from my GPS. In this view, which shows only the main route without the escape and the mapping relevant to the trek, every waypoint is shown as a black dot without it’s label, on a ribbon of pink. The principal places I mentioned earlier are labeled. The purple line to the top right of the picture is the border with China (Tibet).

4 thoughts on “The outline trek route”