Throughout history Vassiliki Bay has offered itself as a haven to seafarers, welcoming them to it’s breast with open arms. Modern seafarers, whether sailors, windsurfers or disciples of other modes of water-fun continue to flock here. Nestled in the lee of those ‘welcoming arms’, Cape Doukato on the right and Cape Kastri on the left, are the communities of Ponti and Vassiliki. The biggest of these is Vassiliki although with a resident population of less than 500 it is barely more than a village.

Vassiliki boasts one main street and the seafront. The main street, perhaps 300 yds long has a mix of traditional shops, ice cream parlours, holiday clothes shops, cafés and restaurants. It is barely wide enough for 2 small cars to pass and there are no pavements. Most of the time it is empty and people walk it’s length free of concern for traffic. Many of the pastel coloured shops are half obscured by bougainvillea; red, purple and white. Blackboards and other advertising stands in the roadway, in addition to testifying to the lack of traffic, tempt passers-by with bargains. Apart from the very occasional car the only thing to be heard is the chatter of holidaymakers, and the music playing in the bar at which I am sat; currently ‘Ain’t no Sunshine’. This is fairly ironic as there is plenty of sunshine.

At the end of the street is the harbour. Almost all of the buildings along the harbour road are restaurants or bars. While there are no buildings on the harbour side of the road it is lined with wooden or marquee-style restaurant annexes. These provide diners with marvellous views across the water and the many small fishing and leisure craft tethered to the harbour wall or bouys. In typical Southern European fashion waiters line the street with eager smiles and menus in hand ready to show you to a table. Even though it is not yet midday some people have been unable to resist the delicious aroma of grilled fish that fills the air.

We decide instead to leave Vassiliki for now and explore further afield. Outside the village we got into conversation with a farmer who was tending his vines. He showed us leaves that were pock-marked or completely brown and shrivelled saying that while he still expected a reasonable harvest, in the region of 1000kg (1300 bottles) of wine this year much of his crop had been damaged following an unseasonably wet spring. When we queried the measure the farmer explained that traditionally Greek people measure wine by weight rather than by volume. He spoke good but heavily accented English and took delight in adding that he used to be a sailor and often worked from Southampton which he knew quite well. What a small world we live in!

Heading along the grey pebbled beach towards Ponti, stiff breeze in our faces, the bay to our left was alive with windsurfers and small dinghies. This area is a mecca for windsurfers in particular as the waters are sheltered, the wind warm and reliable, and the bay remains shallow for some distance reducing the need to water-start after falling in. This also makes Vassiliki Bay popular with novices. The landward side of the beach is lined with hotels and hire businesses catering to the sailing fraternity. These are well spaced out and rarely more than 3 storeys high and most have extensive gardens and lawns so the feeling of openness is maintained. The hotels all appear quite new, or newly renovated, and their construction is sympathetic to the area. While we did pass a few sunbathers most of the people here are intent on getting onto the water rather than laying beside it. Despite the activity on the water the only sounds were that of the pebbles crunching underfoot and the gentle lapping of waves at the waters edge. Oh, and the occasional splashes and exclamations from those learner windsurfers yet to acquire good balance!

The wooden restaurant at Ponti.

Arriving at Ponti we spotted a little restaurant overlooking the bay, or more correctly a wooden restaurant annexe on stilts over the rocky shore. We were shown to an orange tableclothed table by the young casually dressed waiter who proceeded to added a paper covering in the manner common in Greece. Due to the breeze he needed a little assistance to peg the paper down but in no time we were salivating over the menu. Regular readers will be glad to note that fried eggs were not available and we instead chose grilled sea bream and a Greek salad, with a kilo (a litre) of white wine. Interestingly, what we call a Greek salad is called a village salad in Greece although the former name is still used in most tourist restaurants. In due course another British couple came into the restaurant and after a while we got chatting, the conviviality doubtless assisted by the glasses of house dry aspro (white wine) being consumed. Bearing this in mind it was helpful that both were called Chris We got on like the proverbial ‘house on fire’ and we were soon swapping stories of home and holiday. Other diners came and went, so engrossed were we in conversation. I think the restaurant owner must have figured we were good for business as he brought us all another kilo of wine on the house. Free! Yes, really! Eventually Chris, a retired senior policeman now working in training, and Chris, an ex-teacher now working in the NHS, had to get back to their ferry to Kefalonia. After we all said farewell as if we were lifelong mates they were last seen practically jogging down the road. I do hope they made it! 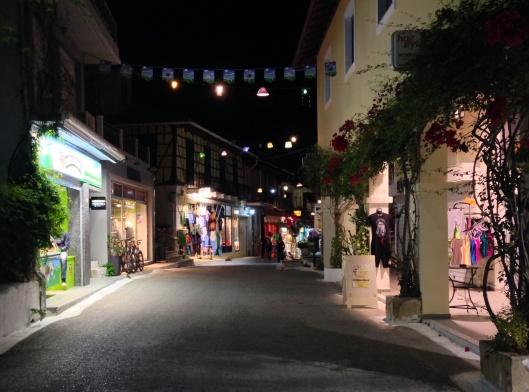 Later that evening, and unable to shake from our minds how much we had liked the look of Vassiliki earlier in the day, and in particular the aroma of grilled fish, we headed back to the village for dinner. We were intrigued to see that the lighting in the main street is provided by light bulbs strung across the road, each of which has a different lampshade! On reaching the harbour once more our senses were assailed by gorgeous aromas. Taking a table overlooking the harbour, the reflection of restaurant lights shimmering and dancing on the water, we ordered a mixed grilled seafood platter for two. Well, it was our Wedding Anniversary after all!

What a day! Our chance meeting this afternoon seemed to me to sum it up: great weather, great people, great food, great location. In parting Chris said ‘I’m sure our paths will cross again’ and, you know, I think he’s right. At least we hope so.