Today started uphill, then went rapidly downhill and kept on going. Even paradise has its hiccups!

Up at 7 to an overcast sky and with the words of the vine-farming ex-sailor we met yesterday fresh in my mind: “no, I don’t think it will rain hard tomorrow” I headed out for a run. Partly because I said I would the previous day and partly because a run in the early morning is a great appetiser for breakfast. Mostly however because the head needed clearing from our anniversary celebrations.

Striking out at a moderate to slow pace I headed down the rutted rough track that serves our small ‘villa for 2’ and a few neighbouring houses and farmsteads. The sun was up but to be honest it looked about as bright as I felt; as though it’s heart wasn’t really in it. Silently sympathising I pressed on past the dog that never, ever, stops barking, along a tiny country lane with lemon trees to my right, orange and fig trees to my left. 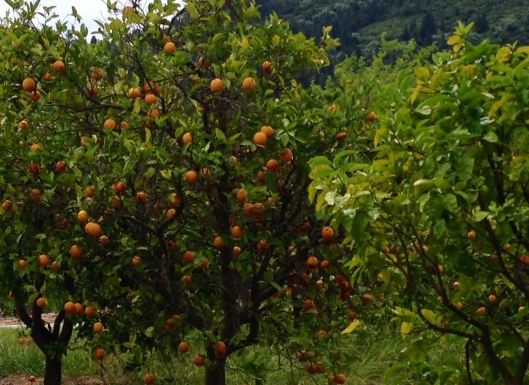 Once past the fenced vineyard where we spoke to the sailor/farmer/weather forecaster yesterday I checked to see if the 2 goats we’d seen yesterday were still tethered in the garden. After looking carefully I could see them both but as they were laying down the grass was taller than they were. Thinking idly that maybe their owner did need a lawn mower after all I reached the main road, i.e. the road between Vassiliki to my left and Ponti to my right. There not being a vehicle in sight as usual I crossed without breaking my stride noting only the smell of fumes from the BP petrol station as I did so. This place looks fairly run down in comparison to the smart and polished temples to motor transport we see in the UK. Given the lack of cars here I’m not surprised.

On reaching the pebbly beach 40 yards down a side road, passing the small but grandly proportioned Vassiliki town hall at the sea front. I turned right towards Ponti, amused to have found this hub of municipality on the very edge of the village seemingly placed for the view rather than the convenience of the good burghers of Vassiliki.

Seeing Ponti at the far end of the bay about half a mile distant I jogged towards it. Soon confirming my initial impression that running on loose pebbles was hard work I moved to the edge of the sea, whereupon an unexpectedly vigorous wave thoroughly wetted my trainers and rendered the loose pebbles more attractive. Putting the likelihood of twisted ankles out of my mind I jogged slowly past several windsurfing and sailing schools and hire shops on the right. This is big business here and all looked well appointed with rack after rack of shiny new gear. 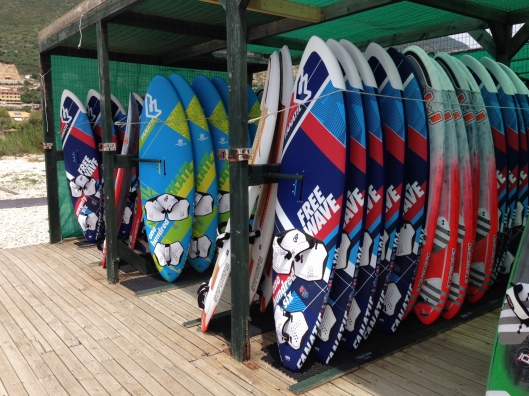 Behind most of these were smart looking low-rise hotels in various shades of pastel yellow, orange and blue to accommodate the sailor adventurers. In front of the hotels were extensive sunbathing lawns and sections of the beach sprouting parasols. 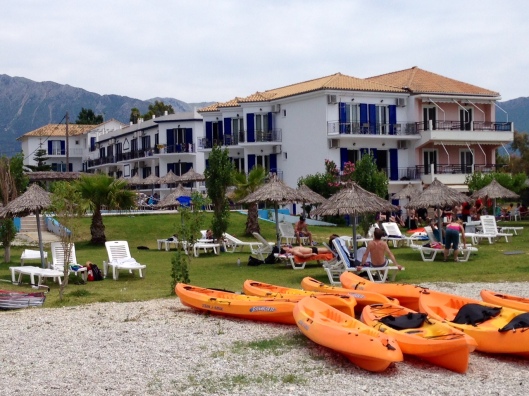 All the time to my left was Vassiliki Bay, calm, serene, and devoid of sailing craft at this hour, the islands of Ikatha and Kefalonia looking mysterious in the early morning sea mist some 4 miles distant.

Eventually, and thankfully, I reached Ponti and climbing a short set of concrete steps I turned left onto the road. After a short while there was a hair-pin to the right and the road headed uphill setting the scene for the next 20 minutes. With the rising ground of Cape Lefkas to my left and magnificent views across the Vassiliki Bay hinterland to my right I ploughed on. The road was dead straight so I could see plainly there was to be no respite until I turned round. I set my goal as running without slacking for another 20 minutes. Promptly wishing I had set a shorter target I eased my pace a notch and dug in. The sun was getting hot now and the myriad wild flowers of yellow, blue, purple, orange and white in the wild grassy verge were noted but not really enjoyed. Eventually the 20th minute ticked away and I turned around determined now to actually SEE where I was rather than just BE where I was.

It was glorious. The views over the bay and valley now to my left were stupendous. The valley a verdant green with trees, grass and farmland only occasionally pierced by the red of a tiled roof. The sea was deeply blue and barely rippled. When I coined the expression ‘an emerald in a sapphire sea’ to describe Lefkas in my first blog I had no idea just how apt an expression that was. With only the chirruping of birds adding to the sound of my footfall on the road I recognised broom, thistle, daisies, honeysuckle and cow parsley in the verge. There were many other wildflowers that I recognised but could not name.

The aromas coming from the verge were complex. There was the heady smell of undergrowth mixed with that of grass. From time to I detected the sweet aroma of maple syrup, more potent than the smell of the maquis in Corsica. While trying to track down the source of this I heard a kind if rattling and heavy breathing in the depth of the undergrowth and I stopped for a while to see what it was. The noise continued for a while but then subsided and I saw grass parting a few yards away but never caught a glimpse of the culprit.

I jogged back to Ponti, this time remaining on the road to Vassiliki rather than going back to the beach. My final observations before again passing the BP garage were more urban than those on the hill. I saw several young people heading towards me from Vassiliki. While fairly trendily dressed they didn’t appear to me have the spring in the step nor the excitable air of holidaymakers so I presumed these were staff making their way to work in the hotels and hire shops. I also noticed a subtle but distinct difference in the appearance of the properties and their gardens towards Ponti as opposed to those towards Vassiliki. The former appeared to be just a little more careworn and tired. Perfectly clean and respectable there was nonetheless a certain faded element to their façades; the grass a little more dry, pavements a little more cracked, trees and shrubs a little more sparse.

On reaching the petrol station I noticed the sun was obscured by clouds and that these were much thicker and widespread than previously. Within 5 minutes I was back at the villa with the neighbours dog still yapping. Rapidly divesting I jumped into the pool at about the same time the first drops of rain fell.

It is now 7 pm. We have had torrential rain all day and even heard thunder at one point. While this has been a disappointment it has nonetheless enabled me to make good progress on preparing my next writing course submission.

But if that dog doesn’t shut up soon I’m gonna go mad!!

4 thoughts on “Ups and Downs in Paradise”