This morning commenced with a early departure. Having only joined us on day 4, Rob sadly had to leave the trek. I noticed him talking intently on the telephone yesterday evening but thought nothing of it until later. He told us that while he and his wife were in France his daughter had remained in Australia. She called him to say that their house was under dire threat from a major bushfire and she needed to discuss the situation and salvage options. After a night’s reflection Rob decided that he needed to be closer to reliable communications and maybe to return down under immediately.  Either way we said goodbye early this morning. Good luck Rob!

Meanwhile the remainers were heading to Grimmentz, a village in the neighbouring valley. We were to take a minibus to Cotter to save the roadwork and group members were invited to choose whether to go in the first run or the second. The first group were to walk a little futher than the second group and were taken to the hamlet of Cotter, via Forclaz and La Sage. It was only 7 miles or so but we gained an easy 700m. 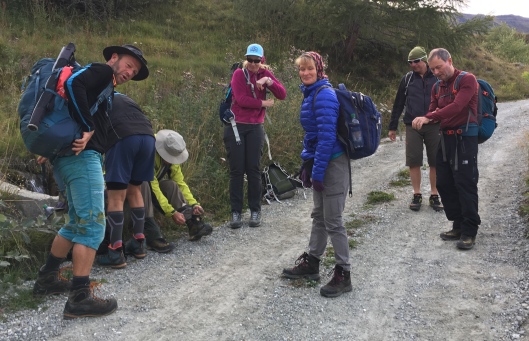 Setting off the views all around were stupendous and my heart really sang for the first time. This was chocolate box Switzerland and there was more to come. This view looking northeast. 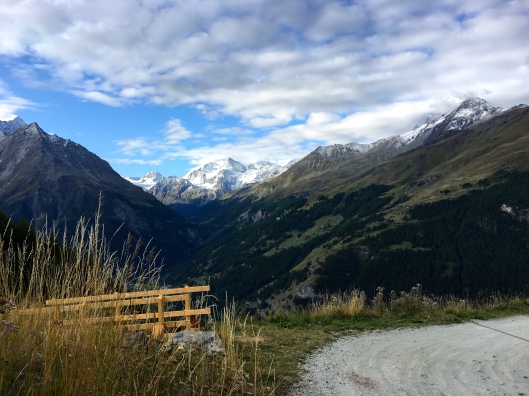 And this looking back the way we had come, to the southeast down the valley towards Arolla les Haudères. The prominent mountain in the centre is Grand Dent de Veisivi, with Dent de Perroc beyond. Pigne d’Arolla is the highest snow-clad peak to the right.

In due course the group was reuinited and we set off for the top of the ridge, but the views kept calling and being in a hamlet served to accentuate our height and the beauty around us.

As we progressed the shade of blue in the big sky above darkened and the early light cloud began to disperse. Sunlight stole over the surrounding mountains and our dry soil zig-zig path led us ever upward towards the ridgeline.

At about 11 we stopped for a break at a particulalrly photogenic spot. Though these photos may not do it full justice and maybe the bloke in green should have got out of the way, it was very special. There were a lot of photos taken and a lot of chocolate shared. Swiss of course. Oh, and some more of my bro’s mint cake and some well travelled Trail Mix that had actually been to the top of Mont Blanc in June. No expense spared eh? 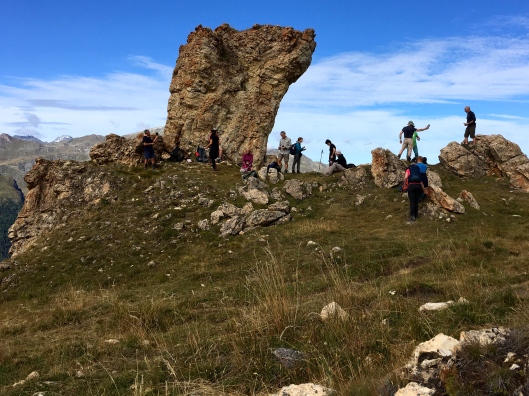 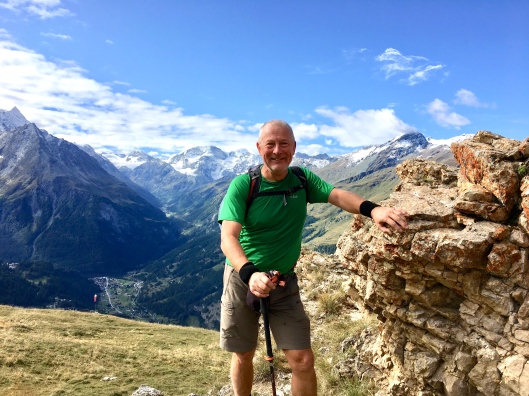 Then it was onward to the Col de Torrent another hour’s climb away in increasing heat. 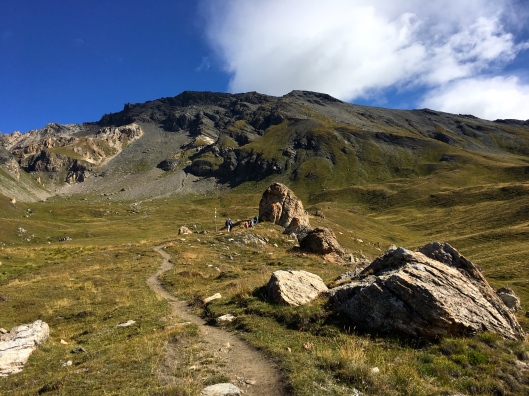 The path remained dry and wasn’t always steep as we traversed natural terracing. After the ropey weather of the first few days we were blessed with glorious sunshine, light winds and endless views. While the steep section was always in view the smiles never faded. Why on earth would they?

Eventually after a prolonged section of steep and rocky path through a blasted area of boulders and scree we reached the col. From here the views exploded and became even more dramatic, if that was possible. We were now looking down from nearly 3000m into the Val de Moiry with the Lac des Autannes in the foreground and the much larger and stunning Lac de Moiry below.

Shortly after leaving the col we stopped for lunch and Pascal with customary wizardry produced a feast. New this time was a ‘gendarme’ sausage to be eaten with mustard.

In fact there was so much food and we had made such good time in the morning although it was fairly chilly at this height there was time for a siesta.

Then Bobbie helped Amanda’s stiffness with some painful-looking contortion aerobics. The mountain air affects different people in different ways but it was jolly entertaining for the rest of us and Amanda did say she felt better. Extraordinary!

After lunch we headed fast down into the Val de Moiry and the stunningly intense aquamarine or turquiose waters of the lac. This breathtaking colour is apparently due to rock salt in the water that absorbs some of the spectrum of light and predominantly reflecting the blue. The intensity of the blue is normally enhanced by the blue sky above although by the time this photo was taken it was getting distinctly grey. 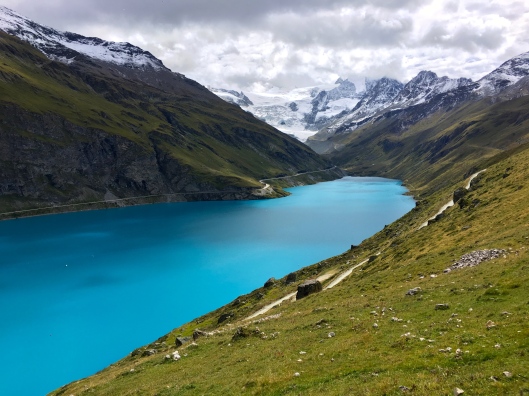 The Lac de Moiry is actually a reservoir holding a massive 78 million cubic metres of water. While the lac is 120m deep the dam at its head is 148m high. By now the sky was blue again and the lac really glows blue.

Our route took us to the side of the lac and then over the massive dam to a little cafe on the far side where we were to meet Yves. Yves is actually a very senior, extremely talented and knowledgeable Alpine guide in his own right. He is so much more than a driver and we were lucky that this week he supported Pascal with kit transfer.

After a well-earned refreshment at the cafe Yves took us several miles north to the village of Grimmentz where were were to spend the night, thereby saving the road walk. Grimmentz is a delightful little village that epitomizes Switzerland for me. I don’t think I can do better than to show you, rather than try to describe its charm.

From this hostelry is was only a short walk to our accommodation. Having described last night’s hotel as a million percent better that what went before, the bar just got raised higher. The Gite de St-Jean was perfect. The owners were charming, the food was very tasty (soup followed by unlimited cottage pie), the wine and beer were chilled, the rooms were spacious and each sleeping space had plenty of elbow room and colourful bedding. There was a good Wi-Fi and numerous charging points. The showers were clean with plenty of hot water and the views were magnificent. There was even a sensible sized window ledge in the 12-man room I shared with Bernie, J-P, Bobbie, Amanda and Jacqui where I could put my smelly trainers. I think we had our best night’s sleep on the whole trip here as this group were to the quiet end of the snoring spectrum. Best of all there was real Swiss muesli for breakfast in addition to a continental spread. I couldn’t recommend the Gite de St-Jean in Grimmentz more highly.

Here are two of the views.

The first being enjoyed by Nigel and J-P, along with some complementary peanuts: 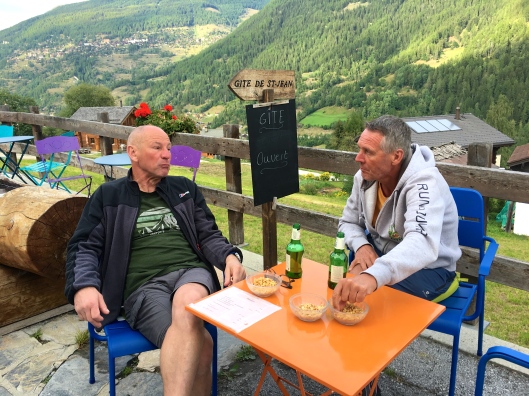 And this looking back towards the mountains at sundown. 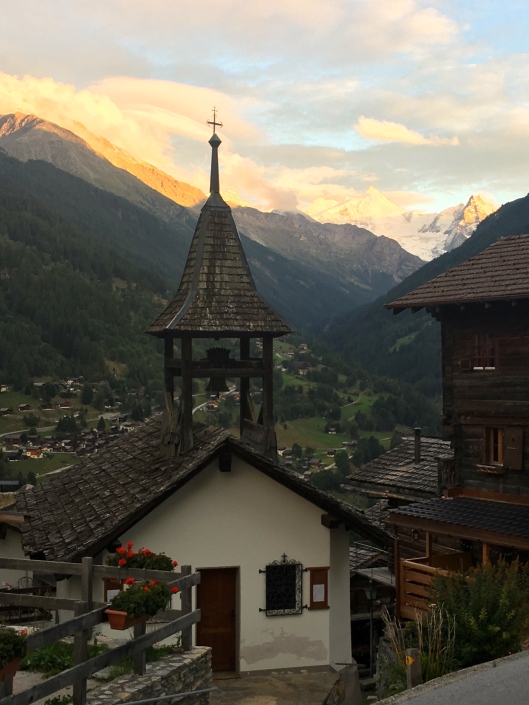 Such magnificence. I wanted to stay here all week! Could tomorrow possibly be better?