After the broadly fine weather yesterday we barely dared hope for another. But we got lucky!

From the Cabane de Praflueri (2662m) we headed across boulders and up rocky and still icy paths to the Col des Roux at 2800m. It was cold in the ealy morning mountain air and the sky was almost cloudless as we slipped and stumbled down into the valley and then up to the col. The distance was only 800m or so but it was tricky underfoot. The view from the col looking south was superb. Grande Dixence lake, or the Lac de Dix, shimmered and reflected the high mountains beyond: Mont Blanc de Cheilon (3870m) to the right and the Pigne d’Arolla (3796m) on the left. I climbed Pigne d’Arolla on my first Alpine skills course several years ago.

From the col we headed down steep and initially icy but dry rocky paths to the side of the Grande Dixence lake. In the north to our left we could see the top of a huge dam.

The Grande Dixence dam, the world’s highest gravity dam, is part of a vast complex that includes four pumping stations and three power stations with a total output of 2,000 MW. 100 km of tunnels in the midst of the mountainous area collect meltwater from 35 glaciers in the canton of Valais. The Grande Dixence hydroelectric power complex accounts for 20% of Switzerland’s energy storage capacity and provides enough electricity to power the equivalent of 500,000 homes.

But we turned to the right and made our way along an uncommonly flat vehicle track dodging, and occasionally climbing up the rocky sides of the track to avoid, several dozen sizeable horned cattle. The delicately toned bells around their necks did little to diminish the size of these beasts and we were wary as they passed, usually closer than this.

By mid morning we had reached the southern end of the lake where we stopped for a break. Even though most people had snacks, and I was enjoying and sharing some Kendal Mint Cake which was a gift from my brother Richard, Pascal passed around some sweets and biscuits to keep us going.

After 10 minutes or so we began the climb up to what, for some people, is a significant challenge, the Pas de Chèvre ladders close the the Col de Riedmatten. The way was initially up steep but well-defined paths through mixed grass and rocks. With the view of the lake expanding all the time and the weather reamining good this was a joyous section, but it wasn’t without a slippery climb or two. 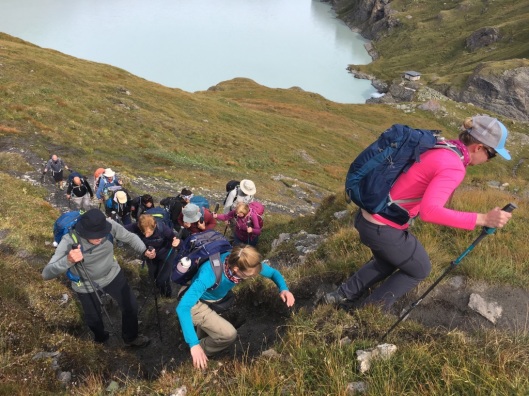 Eventually the grass thinned then disappeared as we climbed a moraine and the way became rocky and desolate once more. Further on we walked for a while alongside a mountain stream. Though were were pretty warm for our exertions nobody was tempted to dip their toes into the glacier meltwater. 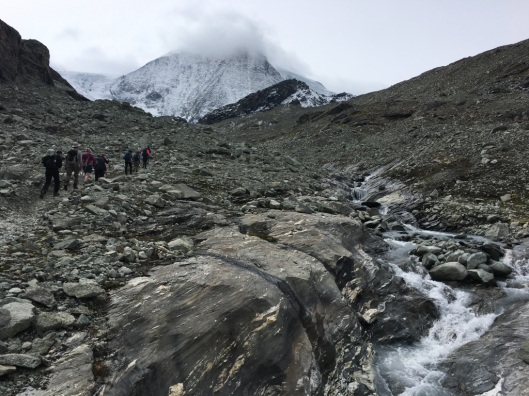 Towards lunch time a decision was to be taken. Would we cross the ridgeline overlooking the Cheilon Glacier into the Arolla valley by the Col de Riedmatten or would we use the ladders at the nearby Pas de Chèvres?

Until 2014 the ladders, installed decades ago and subjected to the elements as well as the traffic of thousands of hikers, were not used by everyone. Many hikers opted instead for the steep, loose terrain of Col de Riedmatten. Given these two options, this section was often more of a dreaded moment than an enjoyable experience. Now, however, all of the stunning glory of the Cheilon Glacier and Pigne d’Arolla can be enjoyed free of trepidation. At least by those with a head for heights. New ladders, installed in 2014, are a marvel of Swiss engineering. Built directly into the cliff face on freshly scoured granite, these ladders inspire confidence, alledgedly. The views from the platforms are stellar, and you can take in the splendor in relative safety. As for Col de Riedmatten, though there are cables and chains protecting the upper sections of the trail, rockfall is always a possibility. We, or more precisely, Pascal, chose the ladders. Everybody was fine on all of the 4 ladder/platform sections, but some were more able to enjoy the panorama than others and those yet to climb looked on apprehensively. 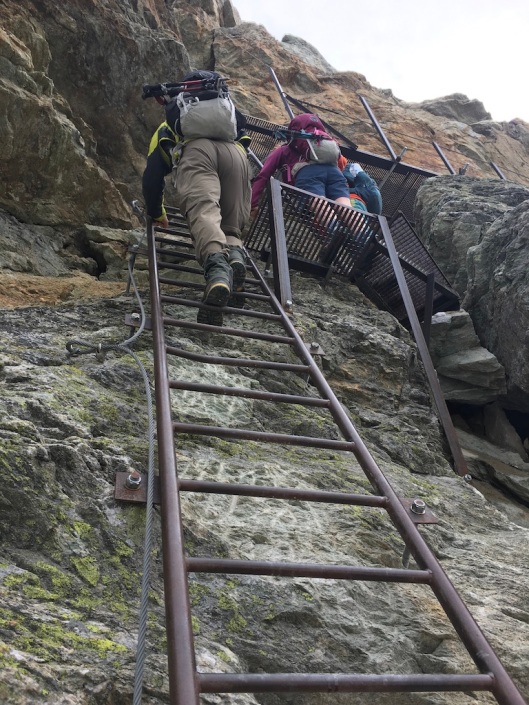 Mercifully, once were were all safely at the Pas de Chèvre it was time for lunch. Once more Pascal broke out the little red and white tablecloth on to and around which were placed the various lunch items by those who had carried them. Food carriage is a shared responsibility but Pascal always carried more than his fair share. 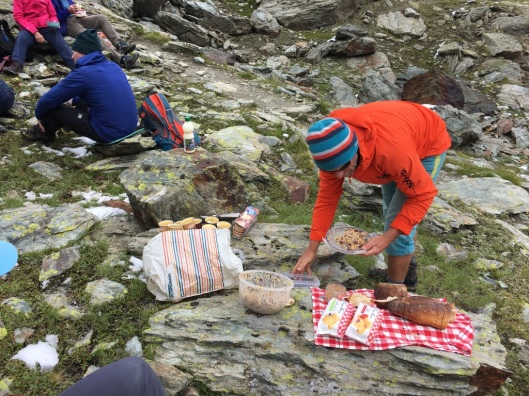 After lunch we had a relatively easy, and definitely less stressful, walk down to Arolla with stunning views of the Pigne d’Arolla and its glacier to our right. 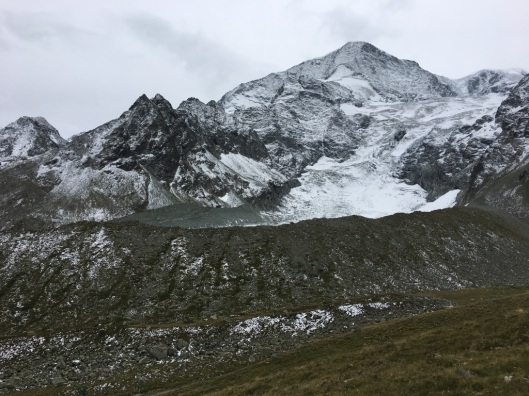 In due course as we lost height the way became green and the air warmer, although it had never been really cold. Shorts and t-shirts were the order of the day for some while others preferred a little more coverage upper body and some on the legs too. As we aproached Arolla the vegetation became more green.

Arolla is at the end of the Val d’Hérens at just under 2000m at the foot of Mount Collon and we were to be taken to our overnight accommodation at Les Haudères from Arolla. This would save unecessary and unwelcome footslogging along roads. As we approached the village anticipation of there being a source of refreshement grew. It had been a long day after all.

But Pascal’s colleague, Yves, was waiting to take half of the group to les Haudères village and I opted to be in that group. There would be refreshment there too, and being in the first group guaranteed a choice of beds and a hot shower!

Most of us, all except 3 of the women, were staying in the delightful Hôtel Pension des Alpes. They were in the slightly more up-market Hôtel des Haudères around the corner, but we all ate and drank together and the girls were escorted home, some later than others. In this picture my room-mate Bernie is happily guarding my meagre refreshment in the beer garden while I took the photo. The others were not far away. 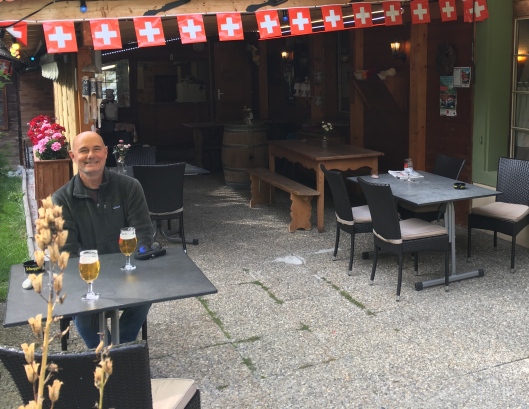 This was the start of a fine evening. The better weather had consolidated and the new joiners were fully integrated. The hotel was several million percent better that the Cabane de Praflueri in every single aspect and this alone demanded celebration. Indeed some people didn’t make it to bed until 2am, not least due to the discovery of a digestive called Génépi, This is a traditional herbal aperitif related to absynthe (but without the hallucinagens) popular in Alpine regions. I couldn’t possibly say who the late revellers were and everyone made it to breakfast on time in good shape.