Our third day on the walkers Haute Route started with a 45 minute transfer by minibus to the small town of Bourg-St-Pierre. We were then to walk broadly north for about 10 miles, crossing under the Grand Combin and crossing alpine meadows to the Col de Mille where we would spend the night.

The Grand Combin is a large glaciated massif consisting of several summits, among which three are above 4000 metres.

Following a tummy-settling post-minibus coffee in Bourg-St-Pierre we headed off north. Initially walking along minor roads we soon left the town behind us and followed farm tracks up to the high pastures. As we gained height we were treated to an unexpected early view of the valley we were to skirt to the east. 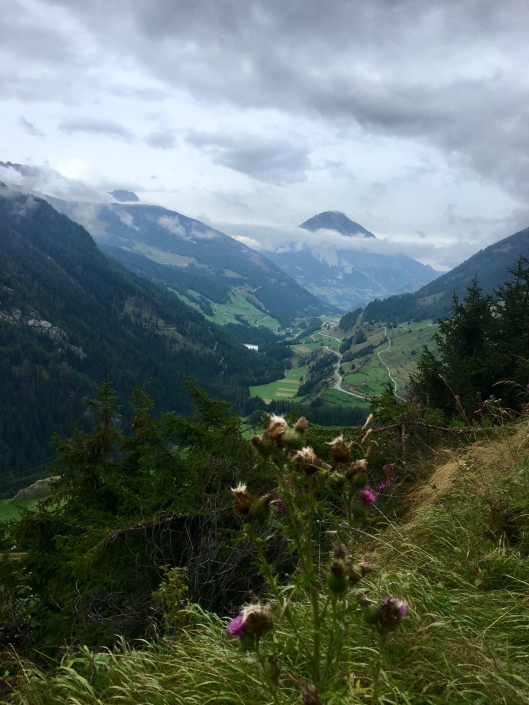 As we gained height we became more hopeful of a clear day. The surrounding pastures were great and we could see across the valley to the alps on the other side dotted with chalets. It was shaping to be a good day and I even risked a photo.

But that proved to be the cue for the mist to roll in again. Five minutes later this was the view.

As a result our eyes turned to our immediate area and I was delighted when Jacqui handed me a mountain raspberry which she had just picked. Closer inspection showed there to be dozens of them and all were beautifully juicy little red gems. Each was no more than 1cm wide or long and often they were smaller, but all were very red, ripe, juicy and tasty.

Then we were unexpectedly granted a glimpse into the murk. Across the valley a very small window appeared in the cloud curtain and through it poked (I think) the Grandes Jurasses. It was a moment of exquisite pleasure. Look closely in the centre-left of the picture.

But the view was short lived as the curtain closed and the mists rolled in again.

At about 11:30 we reached Le Coeur, a creamery making Coeur cheese from cows milk. Our arrival was a little surreal. As we walked through the mist and with the sound of cowbells clanging cheerfully in the distance, a small group of dwellings appeared together with what appeared to be a giant hurling huge sawn logs around to a rock music accompaniment. It turned out to be one of the burlier cheese makers moving the logs closer to where they were needed and he had Lou Reed’s ‘Walk on the Wild Side’ on his radio. Pascal knew the man as one of 3 who worked at Le Coeur and we were invited to tour the creamery.

What a treat it was. We were shown the room where the milk was heat treated. There was a delicious smell of woodsmoke in the room although the cheese is not smoked. It transpired that the wood we saw being piled would in due course be burned in a huge metal container over which a massive cauldron of cheese would be manoeuvred to be heat treated. In the photo below the fire box is on the left and the milk cauldron in on the right. The pulley and lever system to manoeuvre the cauldron over the fire is hidden above.

Once the cheese had been made and shaped it was stored in another building, here:

In this picture you can see new cheese stored alongside more mature cheese. The latter is clearly marked COEUR. 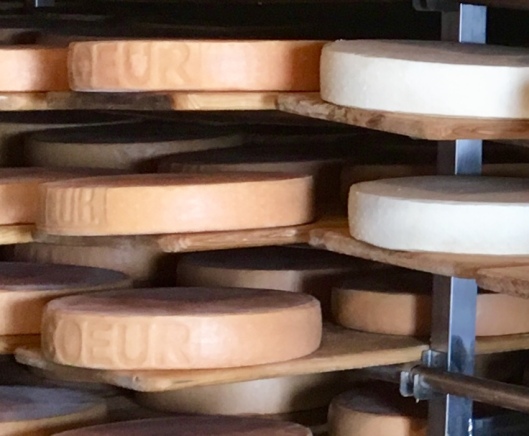 After our tour we bought a quarter of a cheese and proceeded to have some of it for lunch. It was only just after 12 but it was a perfect location to sample the Coeur cheese with fresh artisan bread, saucisson and some terrine du porc (one infused with cognac). We also had some quiche and peaches. Once again Pascal used his delightful little red and white cloth and we tucked in watched closely by 2 very energetic collie dogs.

After lunch we continued our journey north, sometimes in weak sunshine but often in thick mist. During one brighter spell we were closely watched by a cow, in this case a brown one rather than the more usual black.

Once past the path guardian we could see our target for the day, the Cabana de Mille, in the distance around a huge amphitheatre. By the time this picture was taken the mist had obscured it but it was roughly in the middle of the photo. 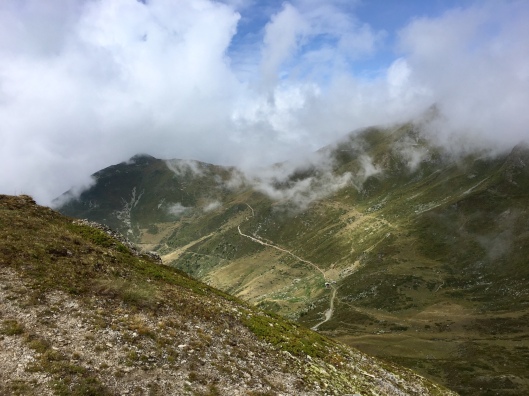 We could have gone directly to it using the obvious tracks seen on the photo, but instead elected to go the long way round to the right and to approach the cabana indirectly.

In contouring around we came upon this relatively new dwelling. We were amused to see the loo, proudly exposed below and to the right of the house. Undoubtedly the best seat around but lacking in privacy and likely to be very cold given the strength of wind typical up here. 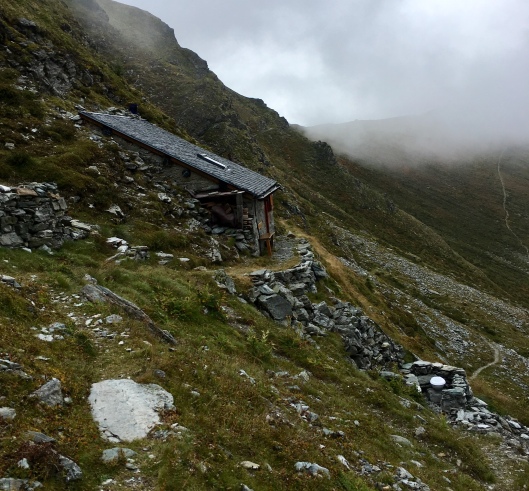 Moving on, we continued to contour around to the cabana, which was reached about 3pm. Modern in style the bar/restaurant area had magnificent panoramic windows.

From which the view was stupendous!

To cap a really good day sadly lacking in decent weather but otherwise most enjoyable, Pascal prepared some of the mushrooms gathered yesterday for us to eat. The orange ones are the Saffron Milk Cap that I mentioned yesterday while the pale ones are porcini. They were cooked simply with garlic and were completely delicious.

The mushrooms were followed by dinner and a lots of chat over a beer or two. Then time for bed in another one-team dorm. Thank goodness I don’t need much sleep.