The first day of our bimble began this morning. Following a fine breakfast at our hotel we caught the Number 2 bus from Argentière to the village of Le Tour, a few minutes down the valley but too far to walk with our overnight bags. He are the gang (in addition to me) at the bus stop: L to R Steve, Jane, Ian, Clive, Wanda, Bernie and Nigel. Jacqueline, on holiday in France from Brazil, was to join us at the start.

We met our ace guide Pascal Rolle in Le Tour. After much handshaking, backslapping and hugging, as he knew most of us from previous trips, we had some tea and coffee in the Chalet Alpin. At 1462m this traditional chalet is owned by the French Alpine Club and Pascal briefed us on the trip from there. that’s him in the black hat and shades.

Then we were off. At about 10am we headed up through an area which, in winter, would have been a huge ski slope but was now a steep grassy slope cut by gravelly access roads. These were used by the maintenance teams to access the pylons and winch gear driving the cable cars overhead. By and by, and in particular once we had climbed past the Charamillon, which at 1850m is a restaurant and first aid post and where skiers would leave their cable cars and continue upwards on ski lifts or tows, the terrain changed. The grass became more sparse and colourful, being dotted with wildflowers in yellow, blue, pink and white. The paths became more narrow and rocky, and steeper. At the same time the sky which was unbroken blue at the start was becoming cloudy. Nonetheless our chatter continued as we climbed towards the Col de Balme, casting occasional glances back across Le Tour to the Mont Blanc massif brightly illuminated by the golden late summer sunshine.

By 11:30 we had reached the col at 2185m and were at the French/Swiss border and took advantage of the bar/café positioned there, the Chalet du Col de Balme. Most people had a coffee or tea but not all as there was also a fine selection of beer from the Brasserie de Mont Blanc. It would have been churlish to pass it by. It was after all nearly lunchtime and we had climbed almost a vertical kilometre to reach it.

After this brief rest we continued. But instead of following the normal Haute Route which just went down the other side of the ridge to the village of Trient, Pascal took us on a path which contoured along the ridgeline to the south east. The purposes of this were to make more of the day, to save our knees from a simple downhill slog, and to give us a view of the impressive Glacier du Trient.

As soon as we crested the col, from the southern, French, aspect to the north-facing Swiss side of the ridge the environment changed. The grass became longer and more green while the pretty little wild flowers were replaced by bushier and tougher wild plants including thistles and heathers. The terrain including the paths became more rugged. Most telling the cloud cover increased dramatically. 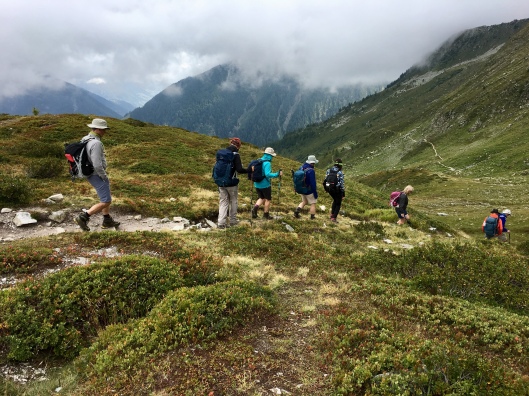 …we stopped for lunch at about 12:30. Pascal had prepared a delightful picnic of cold meat, cheese, tomatoes and bread with peaches for dessert and placed them on a little red and white tablecloth on a flat rock in a clearing and we ate heartily.

We had just finished lunch when the rain started. Gentle at first so we were a little slow in donning full waterproofs. In fact as there was no wind to speak of and it wasn’t cold some people including myself only wore jackets, deciding against the often unpleasant wearing of waterproof trousers too. Pascal even produced a mountain umbrella which he delighted in demonstrating with Bernie.

Then we moved off into the murk, over sharp-edged rocks which were increasingly slippery. Indeed one of our number took a painful tumble which required Pascal’s first aid skills to make good – no it wasn’t me! They finished the day at a reduced pace but in significant discomfort and may take a rest day tomorrow.

Meanwhile while the intensity of the rain increased we were afforded just one glimpse of the glacier when, extraordinarily, the grey curtain parted briefly. Although indistinct the Glacier du Trient may be seen in the upper part of this photo, to the right of the cascading rivers.

Then it was gone and we headed onwards once more. Up and down slippery rocky climbs, sometimes assisted by chain link but mostly just taking great care.

There was one section which would have been very difficult indeed to pass were it not for some impressive Swiss engineering and a grabwire.

That was about the last of the excitement. There followed an hour or so of wet slippery trudge down muddy and rocky paths to complete the walk of around 18km. The woodland was extensive and on a drier day we would have spent longer investigating the lichen, mushrooms and other interesting facets of this valley. Pascal did his best to engage us but with waterproofs struggling to cope with the deluge we headed for our overnight accommodation without delay.

Perched 300ft above the valley and the village of Trient there were some superb views which I would have been delighted to share with you had my camera not given up the ghost. In my pocket for easy access it was always likely to get wet. Had it been in my pack to keep it dry I wouldn’t have been able to reach it without constant stops – and that wasn’t going to happen. Anyway it would still have got wet in use. So with my shorts dripping wet we just headed for home for the night; the Hotel du Col de la Forclaz. Google maps says it has dorm-style and private rooms in an unfussy hotel offering free breakfast, 2 eateries and a bar. Yep, that’s about right. It’s warm and dry. The bar was welcoming enough and the ‘take it or leave it’ dinner of tomato soup, chicken and chips with cauliflower cheese, and ice cream to follow was just fine.

I’m writing this from our dorm. We have a room to ourselves. All 9 of us together in one room. There’s not a lot of space or light but the bedding is clean and we’re all pretty tired. There is a separate bed for one person while the other 8 are in two rows of 4, one row up and the other down. Space on the upper deck where I find myself was eased when one team member unused to sleeping in such close proximity with relative strangers announced that wasn’t going to happen. They took their bedding down to a common space and was last seen kipping in a chair. Ah well. That’s how it goes sometimes. Once my camera recovered and before the aforementioned incident I took this from which you get the gist. It is a bit tight but I’ve slept in a lot worse 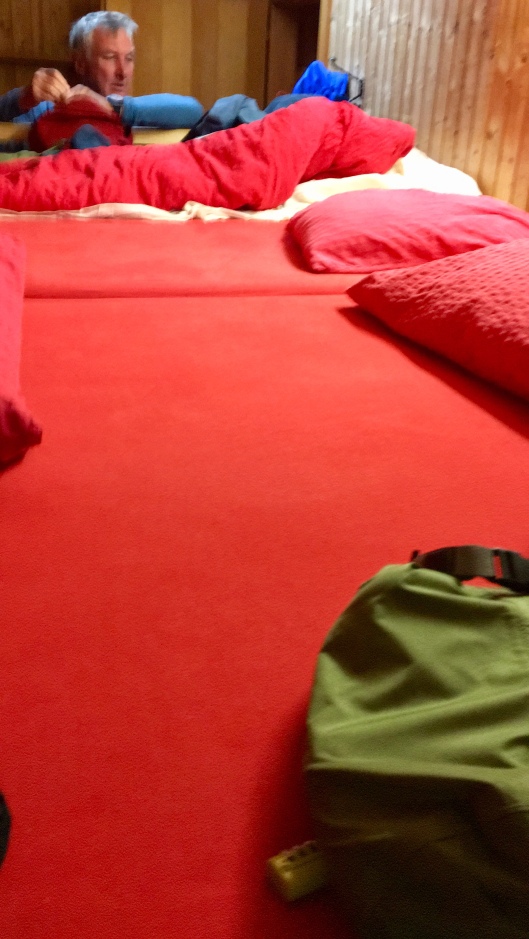 Anyway. It’s just gone 11:30 in Switzerland and I’m now the only one awake in the dorm. Mercifully the loo is just next door. The sound of rhythmic breathing is everywhere intermingled with more strident utterances. And it’s not only the chaps.

Now where did I leave my earplugs.

Haha. You have to laugh. But you know, despite the rain there was not one complaint all day and everyone kept smiling. Even a slight error in navigational understanding that resulted in one gang member striding ahead and ending up arriving at the accommodation two rounds of drinks behind the rest was resolved in good humour over dinner. No, that wasn’t me either.

What a great group of people I’m with. And thanks Pascal. What a star!