Here is the full story of our climb to the roof of Europe. Mont Blanc to the French and Monte Bianco to the Italians.

Our alarms roused us from lack of sleep in the noisy 12 person dorm in Tête Rousse at 03:45 Monday morning. Breakfast was at 04:00 and comprised cereal, bread and butter with cold meat, cheese and jams with fruit juice and coffee or tea. Such luxury at 3167m. There was only one problem: I couldn’t see properly through my left eye. To avoid messing around with putting in my contact lenses at oh God o’clock with grubby fingers I left them in overnight. I had done this many times without problems, sometimes up to 5 days, but today the left lens had gone. Where I didn’t know. It could have come out during the night if I’d rubbed my eye carelessly, or it could have disappeared around the other side of my eye. As it was unlikely to have fallen out I assumed it was dislodged and repeatedly massaged my left eyeball to bring it back. By departure time it still hadn’t reappeared and I was managing, in effect, with only one working eye.

Fully ready for our big day in the Alps, and having packed our rucksacks yesterday evening we heading for the ‘sharps’ room at 4:30. The sharps room is where the items of mountaineering apparel not welcome in the dorms are kept. Items like crampons and ice axe of course but also less sharp but nonetheless unwelcome things like mountain boots, harness and rack, poles and helmet.

Grabbing our gear and finding no room to don it inside we headed outside. This is Stephen fitting his crampons under the watchful eye of David, our guide.

I had let David know about my eye issue and we agreed that it was probably still hiding at the back of my eye and I would set off in the hope that exercise would bring it back. At about 5am we headed out on the first leg of our journey to the top around 1600 metres vertically above us. We were to climb to the Goûter Hut, 600m higher and the place we were to sleep this evening irrespective of today’s climbing outcome. This meant that we could deposit things that we wouldn’t need until this evening in the hut and avoid lugging them to the top and back. Things like sleeping bag liner, spare pants, contact lens fluid and washing kit. Not much but unnecessary extra weight.

The route from Tête Rousse to Goûter was not straightforward. Starting up the left hand side of the Tête Rousse glacier the mixed icy snow and rock terrain gradually got steeper and ended in a series of ledges. This route is in itself a significant climb requiring the use of rope, crampons and ice axe. The most significant obstacle is the Grand Couloir. This is a shute of snow and ice that sweeps down the west face of the Aiguille de Goûter frequently bowling rocks upon the unsuspecting.

Guidebooks advise the Grand Couloir should be crossed extremely carefully and as quickly as possible. While there was plenty of evidence of recent rockfall in the couloir we crossed without incident. Our departure from Tête Rousse had been timed to arrive here in daylight, while the snow was still solidly frozen. This reduced the risk of being struck unawares. In passing we were treated to a view to the west which featured the shadow of Mont Blanc.

Once across the Grand Couloir we continued to climb steeply towards the Goûter Hut. This 90 minute climb was quite tiring as the elevation was steep, evidenced by the number of steel cables fitted to the steepest sections to aid protection. This was my view about 30 mins from the old hut, which can be seen at the top of the rocks. There is a new hut not far away. 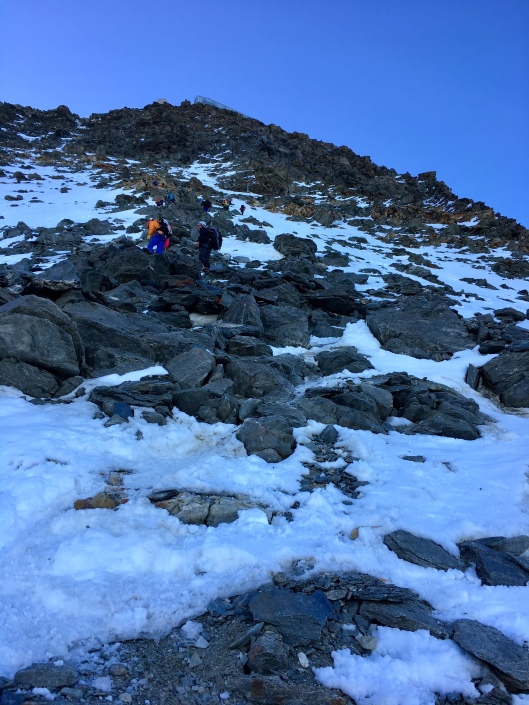 We reached the Goûter Hut at about 7 and dropped our ‘not needed for the summit’ gear. As my eyesight was still not optimal I figured that, no matter how unlikely, the left lens had simply fallen out so I replaced it with a spare. Instantly I felt better but was nonetheless confused as to what had transpired. All I kept thinking was ‘why now???’.

After a bite to eat and drink we set off up the big hill at about 7:30. The ever-vigilant David checked our gear and estimated arrival at the summit around 12:30. Here he is on the snowy crest of the Aiguille de Goûter getting ready to get us roped up for the journey ahead. The amazing space capsule-like new Goûter refuge may be seen in shadow just over his right shoulder. 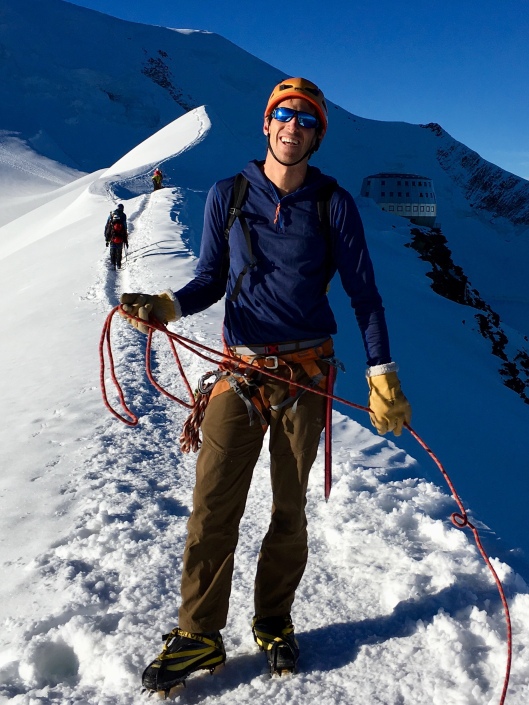 The next stage of our journey was to climb the Dôme du Goûter. The start was a gently sloping snowfield with a couple of hillocks. Not especially taxing at sea level but now approaching 3900m in softening snow it brought challenges and shortness of breath. The scale of the Dôme may be seen in this photo of Stephen striding out. The keen eyed will see a team of 3 climbers making their way up a track slightly to the left of the ridge in the middle of the photo.

The slope up to the summit of the Dôme de Goûter gradually increased but our route made this a little easier by following the zig zag path already trodden by others and which avoided the crevasses. It wasn’t necessary to crest the Dôme; instead having caught up with another group we followed the trodden path to its left towards the Col du Dôme.

Once around the Dôme, after about 2 hours of climbing from the Goûter refuge and having reached about 4250m, we were presented with our first relatively close up view of the summit of Mont Blanc, still over half a kilometre vertically higher than we were. Once again we were struck by the scale of our endeavour and the size of this mountain snowscape. This may be seen though the minuscule figures of 6 climbers on the right of the diamond-shaped track in the middle of the photo by the Col du Goûter. 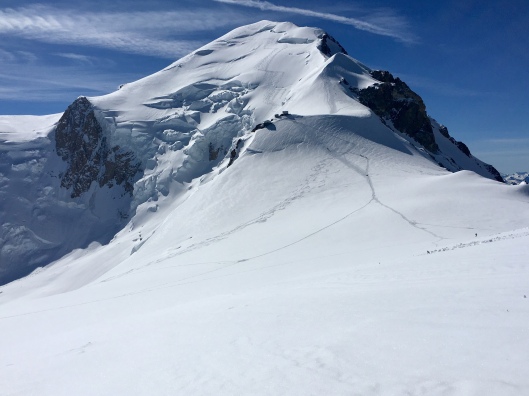 Beyond where the team of 6 were and up a significant rise is the Abri Vallot shelter. This isn’t manned but, at 4300m, it provides a simple shelter for those who need it. We stopped for some food and drink here. Not for long, but long enough to fuel up as the going ahead was daunting. More to the point we could see from here that while the mountain was bathed in warm golden sunshine there was a significant wind blowing higher up. From our vantage point we could see the Bosses Ridge and beyond it the awesome summit ridge. All the way, and particularly along the summit ridge, a strong wind from the left was blowing plumes of snow and ice over and beyond the cornices that line the route from now to the summit. Here is a close up of the summit ridge showing the plumes. 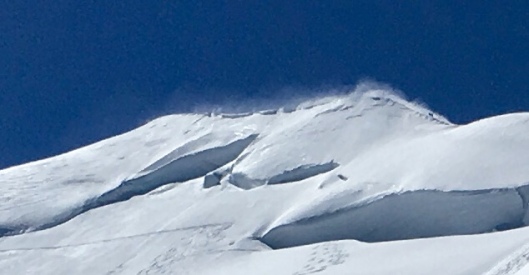 In light of this any lingering foolishness about summiting in shorts and t-shirt were finally dashed as we donned hard shell (wind and waterproof) jackets with hoods raised. At about 10am we struck out for the the first feature of the Bosses ridge, the Grande Bosse. As the name suggests this was a monster ridge. If ever there was a moment of doubt about our capability to climb Mont Blanc it was here. This was ‘heads down and dig in’ time and we did just that. With the wind gradually picking up and driving shards of ice into any exposed skin we kept our heads down and climbed. Every step felt like a Herculean effort but if we wanted to summit, the Grande Bosse had to be climbed. And so it was. And so the belief in eventual success grew. Each painful step climbed was a step closer to the summit and after 30 minutes upward slog we reached the top of this Bosse at just over 4500m. Just 300 vertical metres to go.

Next we had to climb the Petite Bosse. The same approach and focus was required even though this was a lower Bosse.

Then we were onto the summit ridge, starting at about 4700m and rising to 4810m at the top. We still had work to do but we were getting there. We were now so very near and the emotions were kicking in.

Due to the wind from the left, the French side, it was necessary to follow the trodden path just below the crest cornice on the Italian side. “Just 10 minutes more” called David above the howl and I felt a wonderful glowing rush knowing beyond doubt that despite the rising wind I was going to get to the top of this magnificent mountain, clothed as it was in white but today with a mantle of deepest blue.

As we approached we could see the group we had had in our sights. They were whooping and cheering and then we were with them. It was midday exactly, around 30 minutes sooner than David’s estimate when we left the Tête Rousse 7 hours earlier. There was a wonderfully spontaneous upwelling of emotion as we stepped onto the highest point in Europe. Ok, Western Europe if you insist, but we were there high fiving, handshaking and back slapping. The emotion became too much and I grabbed Stephen’s jacket at his chest with both gloved hands and buried my sobbing face into it. Just for a few seconds then everything was ok again. Extraordinary.

We asked for a team photo from one of the other group. Here it is:

We had to have a selfie too of course 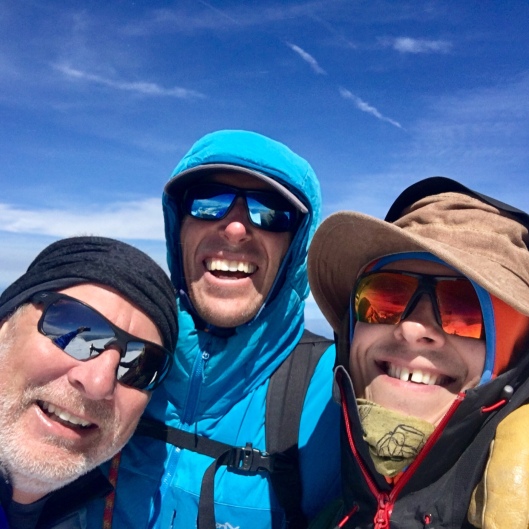 And Stephen took this one of me. 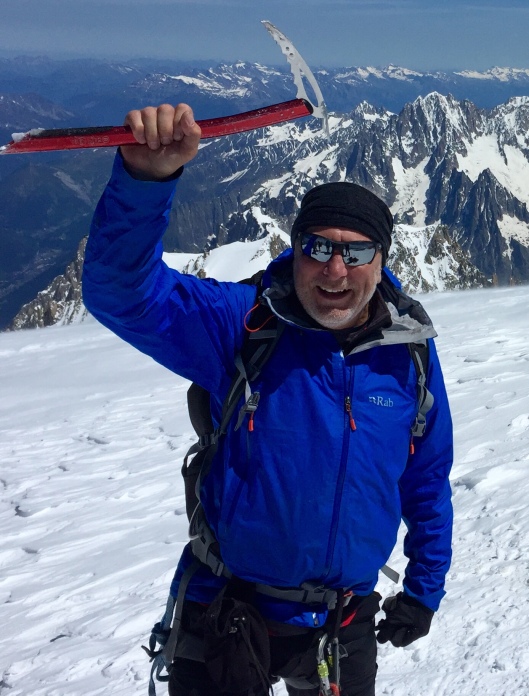 Once we had calmed down a bit, David gave us a panoramic calling out the names of all the significant peaks below, including the Matterhorn and Gran Paradiso. The Aiguille du Midi which towers over Chamonix was a tiny spike far below us, as was the plane that flew by. David even showed us Lake Geneva many miles away in Switzerland.

We could only spend a few minutes up there. While it isn’t obvious from the photo it was pretty cold. David estimated the summit wind to be 25mph gusting to 35mph. We needed to move off. Getting to the summit was only half way, but what a journey it was to half way.

We did get back to the Goûter in good shape and in good time and had a fairly good night’s sleep. The following morning, on Tuesday, we had breakfast at 7am and then retraced our steps down from the Goûter Hut.

This meant crossing the dreaded Grand Couloir for the second time. There was evidence of recent rockfall and I took this photo of a following group, but nothing befell us.

With this behind us there were no more objective dangers and our job was done. We didn’t stop at the Tête Rousse Hut instead preferring to head down to the Chamonix valley by the fastest route. This was glissading (bum sliding) down the snow and icefields almost all the way down to the Mont Blanc train station. What had taken 2 hours to climb on Sunday took about 20 minutes. Thereafter we took the train to Bellevue and the cable car down to Les Houches.

It had been quite a few days and we group hugged for a final time.

We 4 have been quite a team: David, Stephen, me and you. Thank you for being with us. I hope you enjoyed the trip.

Goodbye until next time 😀