Is it time to get up yet?

It’s light and I’ve been awake for ages.

I have been looking forward to today for a long time. Ever since Mummy told me that when I came to stay with Nanny and Papa they would take me to see the dinosaurs. I love dinosaurs because they’re massive. I know some are small but mostly they’re massive. My favourite is the T-Rex. It’s really massive!

Is it time to get up yet?

Papa said we were going to leave early to see the dinosaurs, and some mammoths, at the Natural History Museum in London. I’m really excited because we’re going on a bus and a tube train.

It must be time to get up now!

Mummy has given me some pocket money so I can buy a dinosaur. I don’t want a fluffy one because that’s what little children have. I’m nearly 5 so I want a real one. A model real dinosaur. I really hope I can get one. I’m sooooo excited!

Can I take George with me? And Killi? And Joshua Jofli? Ah, ok George and Kiili need a rest after yesterday. Ok then, just Joshua.

When I called Papa he came and picked me up from the bed and carried me through for breakfast. He made cheesy toast soldiers arranged in the shape of a flower. He told me that’s how he did breakfast for Mummy.

After breakfast Nanny got me ready to go out. I didn’t need her help really cos I’m a big girl but she said I could help with her makeup if I was good.

When we left Nanny and Papa’s we went in the lift and they let me press the buttons. Then we got a bus, a big red bus, and we went upstairs but the bus started when we were still on the stairs and I was scared. Papa picked me up and carried me to the top where I sat on Nanny’s lap.
When we got off the bus we had to hurry for the tube and just got to the platform on time. I love tube trains. I’m so excited!

We had to stand for a while but after 2 stops we got a seat and I sat on Nanny’s lap again. I love Nanny’s cuddles. We talked about dinosaurs and soon it was time to get off. We had to go on 2 escalators in the station.

After a little walk from the station we got to a really big old building and Papa said the dinosaurs were inside. I tried to see them through the windows but they were dark. There were lots of people queuing along the pavement and we had to walk past them to get to the end of the queue.

How long until we go in Papa? 30 minutes? Wow, that’s forever! How long now Papa? Still 25 minutes? Doh! But Papa I’m sooooooooo excited. I’ve just got to jump up and down! Can I have a snacky? I know but I’m hungry. Ah, ok then.

Hooray the queue is moving at last. There’s a man ahead selling guide books. I hope we can have one. He’s coming over to us. He’s coming over to us and Papa’s bought one for me. It has pictures of dinosaurs in it. Oh wow. And now we’re going in and what’s that right in the middle of the room? WHAT’S THAT??! Wooooow, it’s a, it’s a …… what Nanny? A diplodocus? Woooooow. It’s MASSIVE!

What’s that over there? A giant armadillo! Wow! Papa, Papa look at this! What’s that giant elephant on the picture for? An exhibition of what? Mammoths? Oh but I want to see some more dinosaurs! Ok later then. After the mammoths? Ok then. What’s a mammoth? Ah, ok. 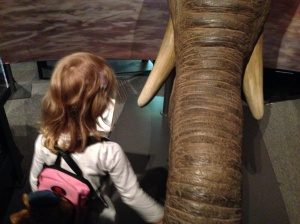 What’s that Papa? A mechanical mammoth trunk? Can I have a go? Woooow. Look Nanny I’m moving the trunk! Can I have a snacky. I said please. Ok, I’ll speak up. Thank you Nanny.

What’s that for Nanny? Can I touch it? Woow this fur feels really soft underneath and hard on top. It’s from a woolly mammoth? That’s brilliant!

Woooooow. Look Papa! LOOK! It’s MASSIVE! And woooooooow! LOOK!!! A short-faced bear? Wow. And a mountain lion? And woooooooooow, that mammoth is MASSIVE. Which is the biggest Papa? The bear or the mammoth? Can I touch the bear’s paws Papa? Woow!

Can we go to see the dinosaurs now? Brilliant! No I don’t need a pee. No, really Nanny I’m sure. Why is there a queue Papa? How long will it take Papa? Can you carry me? Oh, ok. Why aren’t we moving Papa? Oh, look we are now.

Can we go in now? Why is it dark? Woooow look at that. That little dinosaur is moving! Brilliant. Why are these dinosaurs so close Papa? No I don’t want you to lift me up. Really I can see well enough from here.

What’s that noise Papa? Roaring? Why is it coming from behind that wall? Is that really what a T-Rex sounds like? Wooow. No, no I don’t like it. No don’t lift me up, no don’t. I don’t like it. I know it isn’t real but I’m frightened. Can we go Papa? I know but I don’t like it! I want to go. It’s scary and it’s looking at meeeee! 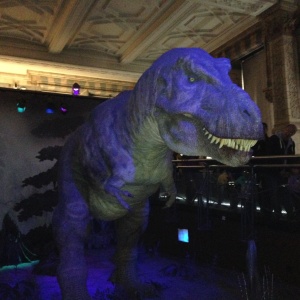 Thank you Nanny. Thank you Papa. I really enjoyed the dinosaurs. Can we go home now and bake cakes?