Breakfast of poached haddock seemed an appropriate start to a day by the waterside. Sounds good doesn’t it? No heights today and no high/low route options. Just 25 (or so) miles of canal/lochside stroll to Fort William.

The first 3 miles was a retracing of my steps from Invergarry down to the Laggan Swing Bridge at the southern end of Lock Oich. Thereafter I picked up the canal link down to Ceann Loch and then Loch Lochy.

The canalside walk started well with a well-marked firm gravel track cutting through neatly trimmed grass and scattered broom bushes. On either side the hills rose steeply, blanketed with pine forests. From time to time the forests encroached upon the canal. As it was still early, only around 9am – I had started early in view of the distance to be covered – the waters were still and the bordering pines were reflected in the mirror-like stillness. Not a thing stirred on the water. In many ways it was quite idyllic and so it went on. And on. Mile after mile. I longed for some variation in outlook or elevation. Odd though it may seem, I wanted to be up in the mountains again looking down, not down in the valley looking up. The only respite was upon reaching Laggan Locks an hour and a half out of Invergarry. This delightful basin was busy with small leisure craft readying for movement up or down the Great Glen waterway. 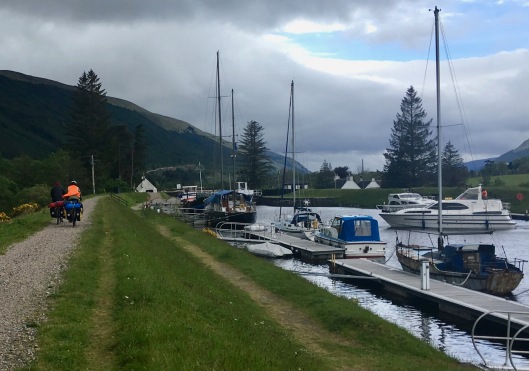 Apparently constructing this, the highest stretch of the canal at 32m (106ft) above sea level, was a major challenge. There were massive amounts of earth to be dug out. Up to 250 men worked here, using horse-drawn wagons on railways to take the earth away. By the 1870’s steamer trips along the canal were very popular. This would have been good for local hotels and shops but not for the lock-keepers’ wives. They were forbidden to hang-out washing when steamers were passing. I would have thought they would have been happy not to have their whites covered in smuts from the steamer boilers.

Not far from the lock is Kilfinnan, indeed my route took me through it although it was hardly recognisable as a seat of historic foment. Kilfinnan was the burial place for the chiefs of the MacDonells of Glengarry. Apparently the 15th Chief, one Alasdair Ranaldson MacDonell of Glengarry, known as Wild Alasdair, stripped his estate of timber to finance a flamboyant lifestyle and evicted tenants to make room for sheep. He was a constant problem for the builders of the Caledonian Canal, demanding large amounts of compensation and chasing canal workmen off his land.

Today Kilfinnan is notable only for its view over Ceann Loch and the boulder-strewn bed of the river which empties Loch a’ Choire Ghlais up in the mountains to the west into the canal. And maybe the cuteness of its lambs of which there were plenty at this time.

The next 6 miles or so were not especially noteworthy. The Great Glen Way followed a minor road variously through pine forest, deciduous woodland, or a mixture. Loch Lochy was ever-present on my left and devoid of craft seemingly kept at their moorings due to the increasingly strong wind raising white horses on the loch. My focus was on making progress south and even the occasional vista of bluebells did little to engage me. The tunnel vision wasn’t arrested until Bunarkaig, about 2 miles north of the end of the loch, at Gairlochy.

Bunarkaig was a gem of a lochside hamlet. As I passed, to my right were a series of houses of significant quality with well tended gardens and the Clan Cameron museum. 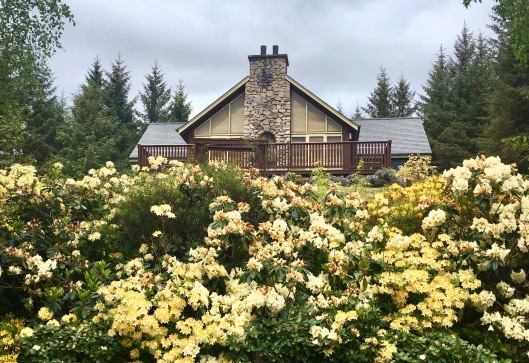 To my left was the loch, but with an interesting outlook and history. During the 2nd World War the Commandos had a training base at Bunarkaig. A small fleet of various craft were assembled to support commando training. These included whalers, cutters, rubber dinghies, bridge rafts and others. By all accounts the training was extremely realistic. No blank ammunition was used and the instructors were skilled in missing ‘but not by very much’ offering training as close to battle conditions as they could get without actually slaughtering half the trainees. This information came from one of 8 commemorative panels outlining the training undertaken in the area of which local people are rightly proud. 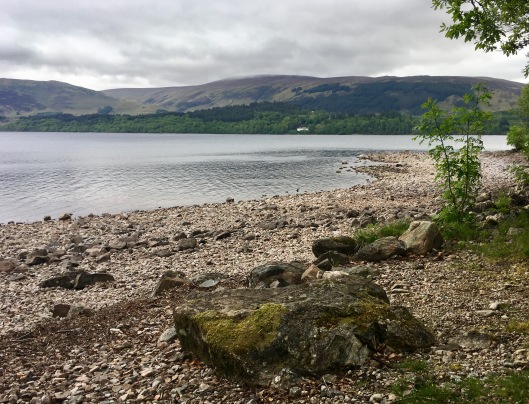 A further mile of so south I made it to Gairlochy after which there was nothing much to enjoy other that the flatness and straightness of the grey ribbon path, the quietude, and the fresh air being propelled at increasing speed in my face. I was probably lucky not to have had this sooner given the principal reason for walking the Great Glen Way west to eat is to avoid the headwind. No wonder the little craft heading towards me had makeshift sails. 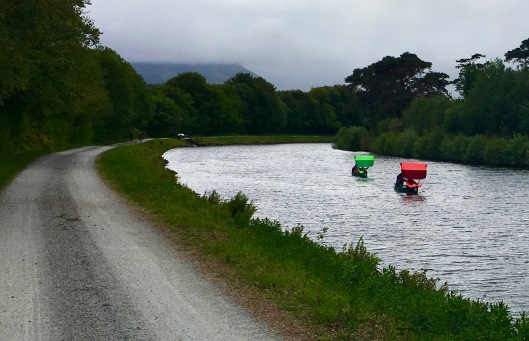 Eventually, after a further 6 miles of relatively uninteresting canalside slog, and with a degree of relief of which I was not proud given it was my choice to undertake this walk, I came to Neptune’s Staircase at Banavie. A short distance from Fort William, this is a staircase of eight locks built by Thomas Telford between 1803 and 1822. It is the longest staircase lock in Britain. The system was originally hand-powered but has been converted to hydraulic operation. The waterborne activity here and the number of visitors provided a most welcome respite and my spirits lifted. This was further helped when, unexpectedly, there was a whoosh of steam and the accompanying sound of a steam train getting underway. Each massively powerful and explosive piston stroke was just a little quicker than the last as it picked up speed departing Banavie station. I couldn’t see the train but I was to do so later.

Once south of Banavie my spirits rose further at the prospect of being close to the end of this long distance trail, even though I still had nearly 5 miles to go to the final set of locks at Corpach which control access to the Caladonian Canal. It felt as though I should be able to smell sea air, but I couldn’t. Neither Corpach nor Fort William is on the sea which is, roughly, another 30 miles to the southwest, through Loch Linnie past Oban. It is however the end of the loch-controlled waterway.

I walked on for a further hour and a half, past the Kilmalie shinty pitch at Caol, through Lochyside, clearly run-down but distinctly optimistic, and through Black Parks alongside the River Lochy into Inverlochy. Upon turning along the Black Parks riverside path I was treated to another whoosh of train steam as the locomotive went by, this time in full view. Hidden in the clouds somewhere beyond was Ben Nevis.

And then beside Loch Linnie, on the site of Fort William’s Old Fort, I arrived at the end (or the beginning) of the Great Glen Way.  After what should have been 78 miles but which, due to humans not walking in straight lines and thanks to the trail closure on the planned approach to Invergarry, turned out to be over 85 miles it was done. Over 4 very happy, healthy, exciting, surprising and enormously enjoyable days, it was complete. Today’s 25 miles had ended up being 28 but I could at last allow my feet to hurt as I shuffled to the best real ale pub in Fort William, the Grog and Gruel, for a beer, a sit down and a huge grin of pleasure.

I love walking in Scotland. Thank you for being with me. Goodbye until the next time.

4 thoughts on “The 4th and final day: from Invergarry to Fort William”