After our day of rest in Ringmo it was time to move on. I was certainly keen to get back on the trail and I think others were too. The end of the trek in Juphal was still over 25 miles away over less rough but still demanding terrain. While we could have done that distance in a day if necessary we would have arrived very late in the day and would have had less time to enjoy the increasingly green and verdant surroundings. Instead we decided to head for Chhepka around 15 miles away, which would make the walk to Juphal as an easy final half-day or so. In light of this breakfast was at a leisurely 8 a.m. and we enjoyed the last of our sheep with tea and bread.

At an equally leisurely pace bags were packed and loaded. Then by around 9:15 we were on our way, warm-stoned dwellings reflected golden morning sunshine and the distant grey-brown mountain ridges cut a sharp and vivid contrast to the clear blue cloudless sky. As we prepared to leave the matronly lady had a few brightly-coloured hand woven scarfs for sale then we bade her farewell without ceremony. Children were already playing in the dusty courtyard as we headed for the track south and as we were by now a common sight about Ringmo our departure went unremarked.

It was great to be walking again. The dusty animal dropping-laden streets of the village soon gave way to a stony track with low scrub on either side. Ahead was a pine forest backed by a mountain ridgeline in stark silhouette against blue. Striding past a huge ochre and cream chorten we soon caught up with a herder and his yaks and followed him along the pathway to the forest. Not being in any hurry we were content to wait but the herder soon waved us past and we had the forest path to ourselves, bright sunlight filtering through the green making subeams through the dust kicked up by passing feet. 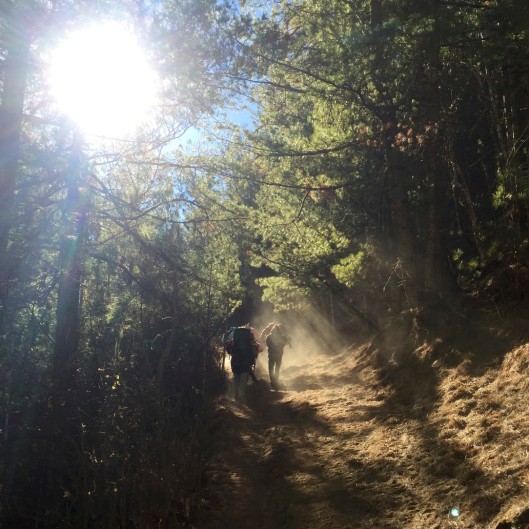 The trees soon gave way to the kind of terrain we were more used to; a narrow sandy track clinging to the side of a mountain. Ever since we lost height heading towards Lake Phoksundo the surroundings have been less stark and there has been more evidence of habitation. The track itself was indented with the footprints of many animals and their herders while from time to time prayer flags of red, blue, yellow, green and white drew our gaze upwards from the drabness underfoot to the glorious blue sky. From our perch high above the Phoksundo Khola, while our view south remained dominated by the jagged 5000m (16,000ft+) ridgeline to the south-east, deep down on the valley floor there were settlements and walled enclosures. Both looked barren in November but their presence showed that in spring life would return. Meanwhile on our side of the valley, in the vicinity of Nepal’s highest waterfall – on the Suli Khola, a tributary of the Phoksundo Khola itself and whose dimension proved impossible to photograph meaningfully without a wide-angle lens – a colourful shelter appeared seemingly balanced on a small pinnacle ahead. 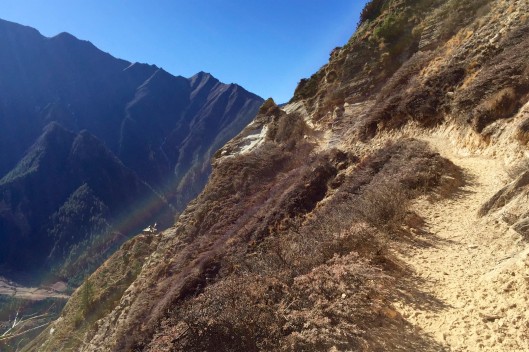 Taking the appearence of the shelter as an excuse to prolong today’s relatively short journey we stopped for a while to admire the stunning views. Although eyes were initially drawn to the waterfall to our left and the settlements of Rike and Maduwa in the Maduwa Khola valley snaking around the feet of the mountains to the east there were a succession of passers-by. While our laden ponies grazed the thin scrub nearby the herder we had passed earlier in the day hailed us as he drove his yaks past at some pace. A few minutes later 2 men passed us with 4 yaks adorned with load-carrying paraphernalia but no actual loads, followed a while later by the mens’ families; a lady in traditional dress carrying a youngster in a black and blue scarf papoose on her back and 2 young boys careering down the track without fear of the drop to their left.

Thirty minutes down the track we came upon a small settlement that appeared only recently vacated and whose inhabitants we took to have left to head south, although from there less than a mile ahead, several colourful roofs could be seen.

Just 15 minutes later we were alongside the Jharana Hotel and Lodge. This 4 room, 15 bed, 1 toilet establishment is basic and guests will need their sleeping bags in lieu of bedding, but it boasts 24 hour electricity, presumably due to the large array of solar panels in the garden, and running water. Next door the lodge sported a sign saying (curiously given that the colourful roofs we saw from the deserted settlement turned out to be nearby village of Sanduwa) “Wel-Come To Chunuwar (3134m)”. It went on to advertise: Lodge, Food & Beverages, Campsite, Garden, Vegetable, TeleCom.” It looked pleasant enough with sturdy walls, wooden-framed windows and doors with good padlocked bolts.

Next door was a suspension bridge across the river to Sanduwa. This splendid bridge, built in 2014, bore a sign saying “Donated by KADOORIE Agricultural Aid Association British Gurkhas Nepal.” The KAAA is the Kadoorie Charitable Foundation’s Nepal field team and has a close relationship with British Gurkhas Nepal. The KAAA is a long-term implementing partner of the Gurkha Welfare Trust and provides funding towards the trust’s community medical camps in remote areas. The KAAA has an extensive programme of community aid projects that develop the basic infrastructure of Nepal, improving village economies and quality of life, and this bridge was just one example. In 2015 and 2016 alone Kadoorie provided 5 micro hydro projects to support remote villages, built 20 bridges, built 20 remote medical camps and completely rebuilt 3 villages following the Nepal earthquakes. The KAAA was founded by the late Sir Horace Kadoorie CBE, a Hong Kong-based industialist, hotelier and philanthropist. Well done Sir! 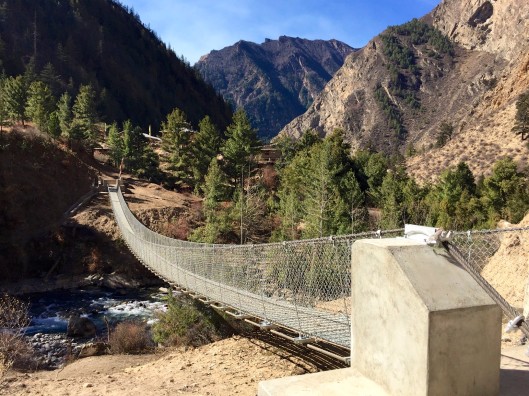 From Sanduwa there were many more river crossings as the path zig-zagged along the increasingly rapid and channelled Phoksundo Khola. With a Scandinavian appearance the terrain became more green with evergreen trees predominating. Conveniently, at around lunchtime we stumbled upon a small military base whose cooks were happy to sell us delicious Dal Bhat (Nepalese lentil curry) and some fairly cool San Miguel after which it was further criss-crossing of the river on normally, but not always, safe-looking wooden bridges.

It was after one of these crossings we saw a group of people and their pack animals ahead. We didn’t recognise these people as those who passed us earlier. They were in a small clearing to one side of the river and had makeshift campling equipment. A small group were higher up the mountainside to the rear of their camp and they were immediately recognised. To my delight it was the Boy in the Orange Jacket and his blue-scarved mother with a few others. They were gathering firewood and when they saw and recognised us little waves were excahnged and ‘Namaste’s’ called. Tim exchanged a few words with a girl wearing glasses. We had seen her before and she was notable as glasses are not common in Dolpo. How extraordinary that we were still in the footsteps of the transhumant family from Saldang. We were touched at the small recognition.

… and others when it was distinctly vertiginous and great care was needed to avoid a calamitous fall to the river far below.

Mercifully those narrow sections became less common as the surrounds, in the space of an hour or two, went from looking Scandinavian to looking more British. Deciduous tress became more prevalent and the terrain underfoot went from rocky/sandy to rocky/earthen. Were it not for the obvious lack of British species we could have easily been in familiar woodland.

The cross-river hop-scotch and occasional revertions to steep-sided and thickly evergreen-wooded narrow gorges continued for another hour or so until we reached Chhepka at late afternoon. Chhepka is a single-street settlement of half a dozen dwellings and in the photo below Tim appears to be surveying it with a degree of scepticism despite the sign welcoming travellers to the Yak Hotel and Lodge.

While it lacked the running water promised at the Jharana Hotel back up-river, and it certain lacked the other’ sunny disposition, it did have electricity and we were welcomed, found rooms, and fed. I shared with Tim in the best room. I didn’t dare enquire after the rooms which Lizzy, Mark and Jovi had, but they survived.

The hotel dining room was across the street, outside of which Gyalbu is showing Sangye where the toilets are – in a shed to one side of a field 50 yards away. The sign on the side of the dining room, on the wooden wall next to the shop (yes, that’s the settlement shop), was in exactly the same style and bore the same text as that which advertised the Lodge next to the Jharana Hotel. Except this one said “Wel-Come to Chhepka”.

And welcome we were. The style of the dining room was what we had come to expect with a central stove and low benches to act a tables while diners sat on mats on the floor. We enjoyed black tea while waiting for the horses to arrive with our gear and once they had, and our gear was in our rooms, we ate. Meat and potatoes in a tasty rich sauce was washed down with more San Miguel and we played cards in the gloom…

…while our horseman, Sangye and Gyalbu looked on in amusement beneath a sign unexpectedly saying ‘HAPPY NEW YEAR’.

The day, a day which saw us lose another 1000m (over 3000ft) in elevation while experiencing a range of different terrains in less than 20 miles, ended with a final unexpected pleasure. The lady owner open a cupboard in the corner of the room to reveal a small television. She explained that as it had been a sunny day she had plently of solar electricity and we could watch football on TV. So we did. San Miguel in hand, no sound and with a picture that was scratchy at best, we sat and watched football, while the lady owner spun yarn by the fire. 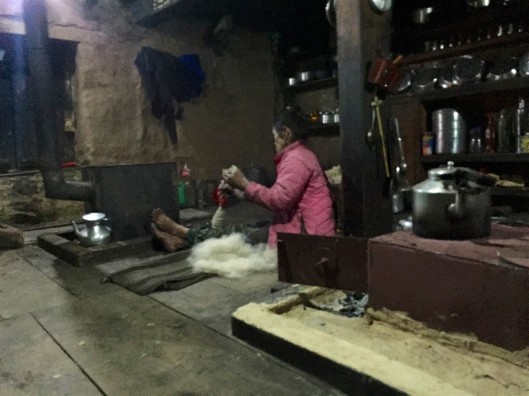