After the thrill of trekking the lake path in the company of the transhumant Dolpo-pa family from Saldang our afternoon in warm and sunny Ringmo was no less fun; just less precipitous and somewhat warmer.

Ringmo, shown on some maps as Ringmogaon, is a traditional village with a seasonal population of about 200. Quite populous by local standards its principal businesses were yak herding and general trading but increasingly tourism is a source of welcome revenue to an otherwise still poor area.

Characteristically dry and dusty under a sky as blue and crystal clear as the lake Ringmo nestles on the banks of the Phoksundo Khola on what is becoming one of the most popular trekking routes in Dolpo. While electricity remains provided entirely by solar power there is one telephone, presumably in the post office which must have been cunningly concealed. Such is the hope of the residents that a new hotel has been built by the headman to attract more visitors.

I understand there were enquiries made by the owner when he learned we weren’t staying there, instead electing to spend a couple of nights with another family who had added bedrooms to their existing house and called it a ‘hotel’ and which was recommended by our horseman. Leaving to one side the basis for that recommendation, while the new hotel stood on high ground with a pleasing view over the village and its surroundings, our chosen abode had more homely qualities; think rustic guesthouse. Reached down a series of alleyways between low, flat-roofed stone buildings variously housing people, yaks and grain, and often all three, dodging goats and inquisitive grubby children we were led to an open courtyard.

There in front of us was a delightful house. Backed by the azure-crowned mountains  and forests was a two-storey building. Its lower floor was of original construction newly fitted with shuttered wooden window frames and doors while the upper floor was all new. Sympathetically built of local stone and rough mortar and also fitted with new windows and doors, one of which was reached by a wooden corner balcony, this floor featured a reassuringly waterproofed roof. Around the courtyard various articles of clothing were drying draped over stacks of firewood, yaks were snuffling around an evil-smelling enclosure, and by the entrance was the customary long-drop toilet. Despite first appearances and any thought of staying up the hill in the new hotel having been banished, we soon warmed to the guesthouse with its cheery demeanour, colourful flags and sunny countenance and our ponies were immediately at home.

We were welcomed by a rosy-cheeked matronly lady in traditional dress who invited us to leave our gear outside for now and go to the kitchen, first on the right through the door in the corner. Inside we found a younger couple preparing food. The room was what we had come to expect in Dolpo. There was a central wood- (or dung-) burning stove (this one with a rickety stove pipe) on which were placed saucepans, frying pans and a kettle. The man sat to one side cross legged on the floor while the woman, in bright green loose trousers and a white-trimmed pink anorak, was on a low stool. Thanks to the new windows the room was not as dark as some and we could see many shelves bearing all manner of cookware, flasks, jugs, plates, bowls, cups, utensils and dry foodstuffs. In one corner was a cupboard which at first sight appeared to be filled with food. The quantity of hardware suggested this was indeed a guesthouse-cum-hotel and we were promptly seated on the floor behind the usual low benches upon which was placed some tea. We were soon joined by other members of the owners’ extended family, 3 men and 3 women in total, who proceeded to laugh and chatter with Gyalbu and Sangye. Then, joy of joys, lunch was served; an awesome omelette! We and eggs had been strangers for some time and their re-appearance was as welcome as it was unexpected.

After lunch we were shown to our rooms. I was to share with Mark in the room on the left in the photo above – the one reached by the balcony- and jolly comfortable it was too. 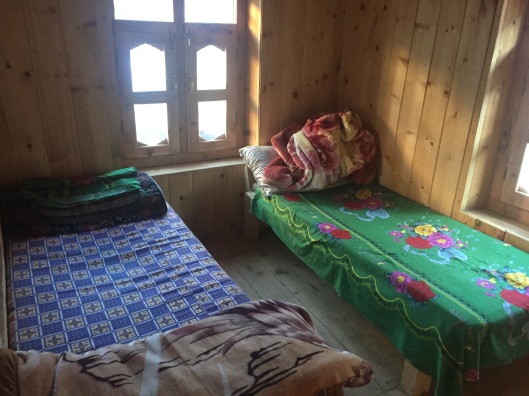 It was a dry and clean room which smelled of new wood in which were two single beds with thin but adequate mattresses, pillows and clean bedding, and enough room for our bags. Once settled we met the others downstairs and headed out to look around the village. We had heard there was a restaurant towards the lake and set off to find it. By now it was about 4:30 and the sun had gone down so big jackets were donned. Heading back towards the lake without bags and having secured our beds for the night, we were more inclined to take in our surroundings. While there were some new buildings in Ringmo, or at least newly renovated buildings, the majority were unimproved single- or two-storey traditional dwellings and we were eyed curiously by the yaks while their owners went about their business unmoved by our passing. 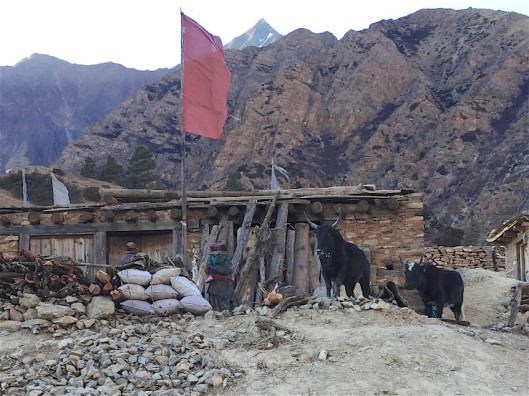 Sure enough, on higher ground at the northern edge of the village with a view over the stunning Lake Phoksundo and the Ringmo monastery to the east, we found the restaurant. It was an older building but fully renovated inside and out in new light wood. There was even a television although we couldn’t confirm that it worked as the precious electricity was being saved for the evening and we were the only visitors. It still being quite early and having agreed to eat back at our accommodation later, we were nonetheless delighted to find some beer available. And not just any beer but chilled San Miguel! As they say, one is never enough although as it turned out perhaps it should have been. Nonetheless we had a fun and relaxing time, on this occasion without Gyalbu and Sangye but having been joined by our horseman, as you can see below… 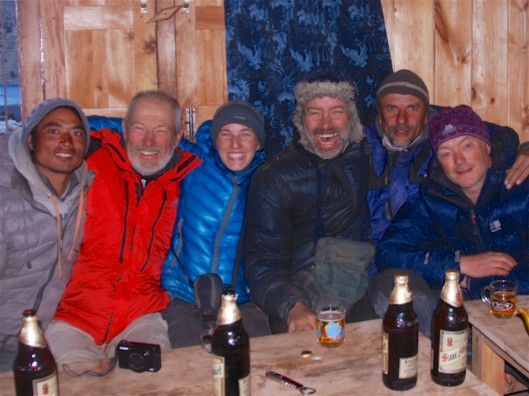 It was dark when we left a couple of hours later and although we should have been better prepared we had neglected to mark our route back to the guesthouse and managed to get lost. Eventually, after a considerable time stumbling around in the dark and probably more by luck than navigational skill, we made it back in time for a dinner of fried meat (unspecified) and rice washed down with monsoon quantities of Raksi, or Roxy as we preferred to call it.

According to our hosts we ‘partied like Tibetans’ before falling into bed and sleeping soundly. In the absence of substantive evidence to the contrary and all having been unaccountably robbed of our memories during the night, we took that as a good thing. That was until we learned that amidst the revelry we had bought half a sheep for dinner the following day. Ah well, I guess it could have been worse.