From the Nagdalo La the views were breathtaking. To the north was row after row of mountain peaks beneath a deep blue cloudless sky. Beyond the grey gritty pass the nearest peaks and ridges retained the familiar burned sand colour with occasional lighter exposed rock between bands of scree. In the middle distance the shading became lighter. With their outline and detail softened by distance they appeared rocky and too steep to support scree. Perhaps the blue sheep seen north of Saldang were still there among bushes and other vegetation but lower down than could be seen from here. Our view was of the upper ramparts and into the distance their shading tended to light grey. The most distant peaks were white with snow. To the south only the nearest peaks and ridges were in sight while those beyond, being mostly lower, were hidden from view. By now it was after midday so the sun was high, but the mountains were so steep that many of their northern flanks were still in shadow with extensive snowfields shining brightly in contrast to their otherwise stark blackness.

At around 12:15 Tim reached the pass, followed closely by Lizzie, Jovi and Gyalbu, and 5 minutes later we were joined by Mark. Despite our good acclimatisation this had been the toughest of all the passes so far with a height gain of over 1000m. The hugs and mutual congratulations we shared made it seem more like we had climbed a peak rather than a pass. For the next few minutes we ignored the elements and simply enjoyed being together surrounded by such magnificence, before Gyalbu led us down into the valley 600m below. 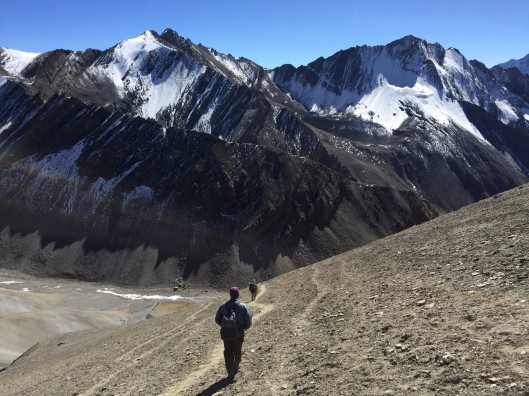 By the frozen Tuk Kyaksa Khola, Sangye had managed to extract enough water to make some tea. Tim and I, who with Gyalbu had descended quickly by scree-running most of the way, used the rest to prepare lunch of chilli con carne with kidney beans and red pepper with rice. This scene, in which Gyalbu is working with Tim to get the stoves alight while Sangye and I are opening bags of chilli con carne, was captured by Lizzie. We were all in a shallow depression to get out of the wind. Once the stoves were alight and windshields were in place a hot and tasty lunch was ready in no time. 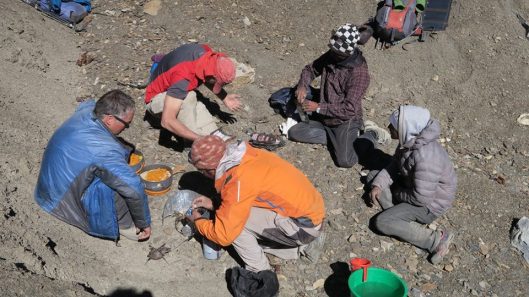 As we would lose the sun early down in the valley we moved on immediately after lunch. We were heading south-west down the river to its junction with the Phoksundo Khola where we would camp the night. While the distance was a modest 5 miles or so, such was the height loss that the terrain changed dramatically.

When leaving our lunch spot the valley was broad and dry strewn with small sharp rocks. There was no vegetation. The only colours were the white of the narrow ice-bound river to our left and the serrated snow-covered mountain ridge ahead, our dirt brown valley bisected by a meandering pale brown track, and the big azure sky above.

The frozen river had to be crossed several times as we descended and the angle of descent increased. The valley became progressively narrower with the escarpments left and right looming more dominant and the rocks towards their base were larger. After a while the escarpments became so steep that the valley looked more like a canyon and we were often in deep cold shadow.

From time to time we would emerge blinking from the shadow into brilliant sunshine and in these places new colours emerged. We saw the tan and olive green of dusty thin scrub on the south-facing scree. Increasingly we also saw low bushes devoid of leaves or other sigs of life but evidence of our progression to a different altitude more tolerant of vegetation. Frequently our path became more of a climb and I found myself glad we were descending rather than ascending. Even our ponies and mules were uncommonly slow on these sections.

By mid-afternoon we were passing dry wild flowers and thistle, small stands of diminutive bare silver birch clinging by the tips of their roots to steep escarpment, and low evergreen bushes. Through our canyon to the valley beyond, while the Phoksundo river was still hidden well below we could make out small copses of pine on the mountainside opposite. But once back into deep shade these brief and valiant outposts of life were extinguished to be replaced by bare grey-brown rock left and right. The cold of the mountainside occasionally emphasised by its adornment with a white curtain. In summer the curtain would be a joy of dancing waterfall and spray but now, with winter advancing, it was solid, deathly white.

We felt the sun for the last time around 3:15. By then we had vertical rock to both sides and and spindly trees and bushes around. These would have flourished during summer when the depths of the canyon were breifly penetrated by the sun. Now their apparent demise was only belied by vestiges of evergreen on the hardiest. With gloves and hats adorned we moved quickly down towards the bottom of the valley which we needed to gain before it got properly dark around 6 pm.

In the event we reached the Phoksundo Khola shortly after 4pm, followed by Sangye and the horseman with our bags and tents. The nags had found the going tough and the horseman, having failed to pursuade us to camp earlier (er, where exactly?), had not pushed his string as hard as usual. We quickly set about putting up the tents while the ponies were hobbled and fed, and Sangye fetched some water for tea. Though still frozen in places the Phoksundo Khola, here at just under 3800m, had some flow.

Once the tents were erected our next priority was warmth and for the first time we were surrounded by wood. There was no greenery but the stand of trees in which we camped managed to survive previous winters and come to life in better weather. There were many dead and dried small branches on the ground and we put these to good use. For the first time we had the means to make a camp fire and everyone enthusiastically joined in the wood-gathering. In no time we had a sizeable pile of firewood and a fire was lit. We dragged rocks around it and sat on them, often wreathed in smoke but revelling in the warmth, drinking tea. Dinner was prepared by torchlight by Lizzie and Jovi. It was another treat from our rapidly dwindling supply of ‘Look What We Found’ ready meals: chicken casserole – this time with Smash – and there was plenty of it. Indeed there was so much potato that the ponies enjoyed some too! A perfect meal for a cold night under the stars made memorable by the heat and light of the campfire. It didn’t stop some people being cold during the long night but at least we went to bed with warm toes and filled tummies and I wondered how the boy in the orange jacket and his family were faring.

I am grateful to Lizzie for sharing these two photographs which capture part of the scene. We were in a cocoon of light and warmth so perhaps you could envisage the wider picture. The flames were dancing beneath a little smoke and if we lifted our eyes from the draw of the red embers around us we could see shadowy tents, ponies and thin boughs of silver birch beyond which there was nothing. The wind could be heard in the upper branches but at ground-level the air was still and away from the fire, freezing cold. There was no cloud and above was the darkest, starriest sky I had ever seen. The river was gurgling a few yards away and from time to time we would hear a pony or mule snort or stamp its hoof. By way of dessert after our tasty chicken dinner Mark had shared a few chocolate bars that he had somehow kept for such an occasion. While this situation wouldn’t suit everyone, for us it was heaven and our smiles were not just for the camera. Of course we enjoyed the challenge of the trek and our encounters with the extraordinary Dolpo culture but the high points, the pinnacles of our adventure, would for me at least be measured not by challenge but by the memory of moments like this. 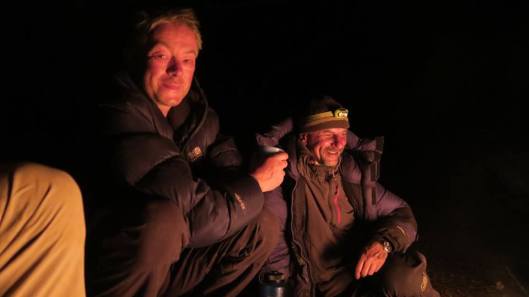 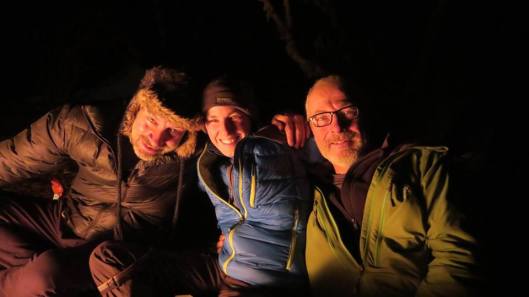 3 thoughts on “Trek day 15 (afternoon): to a campfire and a starry starry night”