After a sound sleep at Chharka Bhot’s Yak Hotel, Thursday’s breakfast was a pleasant surprise: it wasn’t just tsampa porridge. Today the porridge included some yak meat and cheese. Leaving aside the slightly odd combination of meat and cheese mixed with a gloopy tea it was very enjoyable. The meat was quite tough and needed a good chew but was very tasty. The cheese was hard by normal standards but was either in thin slices or small cubes and was good to eat. Most of all it was a welcome addition to tsampa porridge alone.

After breakfast we headed north-west out of the village. As we were already on the outskirts the river bank was only a few steps away. The old village across the Chyanjun Khola looked less like a fortress in the bright morning sunshine. The colourful prayer flags rippling in the breeze and dozens of choughs wheeling overhead gave the picture more life than it had in yesterday’s late afternoon chilly gloom but was nonetheless imposing.

Passing an animal compound in which a yak was being buchered, and then seeing a woman beside the river washing its entrails, we crossed the bridge towards a series of chortens, or stupas before stopping to fill our water bottles; not forgetting to add sterilisation tablets on this occasion. While we hadn’t made a detailed investigation we hadn’t found the health post or post office that our trekking map indicated to be within the village, but they could have been in the older part which we didn’t enter.

The chortens were on rising ground outside the village and were of the 3-tier rectangular variety bedecked with prayer flags and topped with a small mound. They were white and ochre in colour, some predominantly white with ochre embellishments while others were the reverse. Those which were white-based featured narrow walkways through their lower level. All were built with a square or rectangular base of about 8 ft high topped by tiles, upon which was built a similar-looking second-level of around two-thirds the size also topped with tiles. A third-level was added following the same size reduction ratio and whose tiles were capped with a mound which may have contained religious relics. Most were surrounded by delapidated and collapsing stones walls.Their state of repair suggested they were very old, although perhaps they were just faring badly in the incessant wind-driven dust and alternation between hot days and cold nights. This coupled with there being a new gompa (monastery) further down the hill made us assume these chortens were no longer in use. We still passed them on the left just in case.

By 8:45 we had left the village, its yaks, gompa and chortens behind us and were making for Kharka, i.e. ‘resting place’, a camp around 15 miles away in the Panjyan valley. Between us and our target was 700 metres of climb and another huge pass; the 5030m (16,503ft) Mola La.

Despite the relentless height gain the way was benign; being predominantly sandstone of a pleasing hue ranging from butter-cream to light caramel. Dotted only with light low scrub and warmed by the sun the paths were deep in dust. Any incline, up or down, was likely to be treacherous due to small pebbles in the dust which behaved like ball bearings underfoot for the unwary or careless trekker.

In contrast to our experience yesterday and the day before, now that we were to the west of Chharka Bhot we met many Nepalese heading to the village. Given there are no roads here the only way of getting supplies into the village is on foot; human, yak or pony. Clearly the supply route is from the west, probably from Dunai via Dho Tarap, rather than from Mustang in the east even though Kagbeni and Jomsom are only a few days away. An in this photo taken around 9:15, often women carried heavily laden woven baskets or sacks on their backs supported by a tump-line across their foreheads. 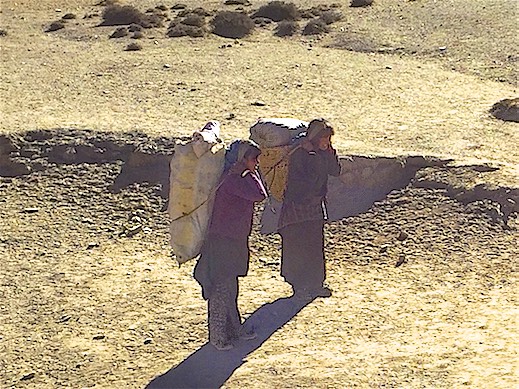 Porterage wasn’t the only occupation outside Chharka Bhot. While we had seen no animals to the east, on this side stragglers were still being rounded up some distance from the village. At just after 11 am, some 6 miles into our journey, we could see a tent and rough stone enclosure in the distance from which a herd of 6 yaks were being driven. As we continued the animals were herded in our direction making for the same path. After a while we could make out two figures calling and whistling to their charges and 20 minutes later our paths crossed. It was a mother and her daughter taking the last of their family’s yaks to their winter compound at Chharka Bhot. They were dressed traditionally with coral and turquoise jewellery and matching white bangles and stopped and talked a while with Gyalbu, seemingly quite taken by his humour. 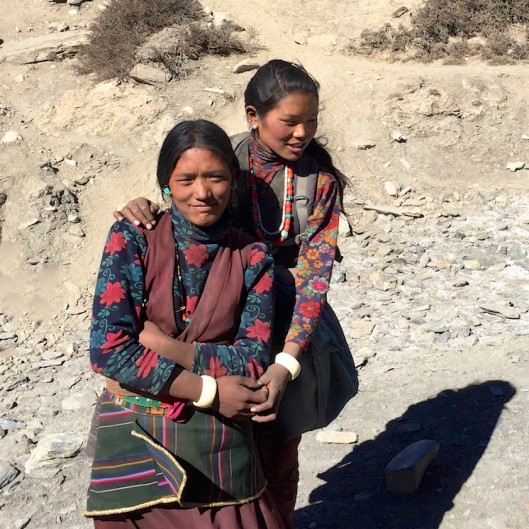 Once we had prised Gyalbu from his appreciative audience we continued our climb to the Mola La which was reached at about 1 pm following a brief stop for a Wei Wei noodle lunch. The weather had continued fine all the way and for the first time we were able to enjoy the views from over 5000 metres without a strong chilly wind. Indeed the prayer flags adorning the cairn were not even ruffled as we looked north-west down the Panjyan valley. Our night stop was just 7 miles ahead, down in the valley on the left bank of the river.

During the early afternoon we continued to meet Nepalese heading into Chharka Bhot. Often these were families with men walking beside pack animals with women and children on horseback moving into the village. We were approaching a total distance to date of around 50 miles and the Australians met between Ghok and Pilling remained the only other trekkers encountered sinse we left Jomsom. So far as we could tell, our group were the only people of any nationality, local or foreigners, who were travelling from east to west in this area.

Once over the pass I moved ahead to catch up with Sangye and the horseman with his string. The afternoon sun was hot without a chilling wind and the golden sunlight bathing the open Panjyan valley was inviting. Such was our downhill pace that by just after 3 pm we were close to the end of the day’s walk and the horseman (on the left below) was looking for the best place to stop.

In the event we set up our tents just over the frozen river. The place on the map called Kharka was just a marker. There was no building and no evidence of anyone else ever having been there. We had it to ourselves. Tents were set up, sleeping bags were aired and the pony and mules grazed on what little vegetation remained.

Late afternoon amid lengthening shadows Jovi and I produced dinner. It was another winner from our ‘Look What We Found’ range, Tim’s favourite: lamb hotpot with mixed rice. Gyalbu and Sangye managed to find some water for tea and a small flask of Raksi to warm us. By 5.15 the sun was down and it instantly became very cold. We were in our sleeping bags earlier than ever; at just 6 pm. It was going to be a long night.

Then something extraordinary happened given that there had been no phone signal for days and we were presently miles from anywhere even remotely likely to have a transmitter: Jovi called from his tent that he had recieved a text message! What?? Call it surreal. Call it unbelievable. Call it whatever you like, but it happened. Now, many people alive at the time say thay remember where they were when they learned of JFKs murder and similarly where they were when they learned of New York’s twin towers being hit. I remember the latter as I was at the corner of Vine Street and India Street in London just passing the Rajasthan 2 Indian restaurant where some workmen were listening to the news on their radio. In turn I will always remember where I was when I learned that Donald Trump was elected US President, for that was the content of Jovi’s text.

How that Trump message got to Jovi we shall never know. But when I heard the news I was in a tent in the middle of nowhere next to a frozen river in the dark with a pony’s bell ringing balefully just outside my tent. I know I will never forget that.

3 thoughts on “Trek day 8: an easy stroll to Kharka and a day to remember”