Today we needed an early start. Nobody really knew how they would perform at over 5,500m (18,044ft) and it was important to leave plenty of time in which to cross the pass and still make the night stop before dark. To that end Gyalbu and Sangye were especially vigilant and brought bed tea at 5:30 and we were up and eating our favourite tsampa porridge (ahem) by 6 am. It was barely light. By 7:30 we and the horses were packed and we set off into the morning sunshine. It was still cold at this hour and the smoke from several villagers’ chimneys was curling and snaking around the stone walls and prayer flags. 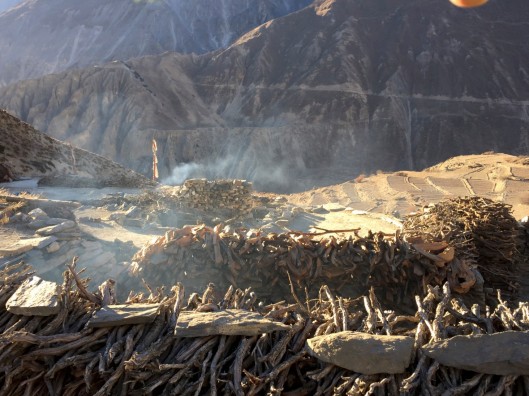 Our hostess was out on her roof to see us off and there was much Namaste-ing and steepling of hands by way of farewell. As we left the village we found most of the children all there, waving and saying either ‘Namaste!’ or a simple ‘bye-bye’. It was really quite emotional.

Then it was down into the small gorge, over the river which was the scene of yesterday’s yak crossing drama, and up the other side. Forty minutes later we had reached Blue Shack campsite, aka Ghalden Ghulden Khola camp, and the others were agreeing with me that we really didn’t miss camping here among other people’s detritus.

The slopes of the Gharchowk Chuska Danda ridge were now ahead of us, dusty dark green and reddish-brown low scrub giving way with height to bare sandy and grey rock, boulders, grit and dust. Spindly sandy and stony paths diappeared into the distance making the Jungben La look every centimetre of the 1300 metres height difference from here to the pass. Head down. One step at a time. Keep drinking. Find a rythym like Gyalbu. OM! MANI PADME HUM, OM! step step step. The monotony of the toil was broken several times by sightings of Himalayan snowcocks, a large grey partridge-like bird of the pheasant family found across the Himalayas.

I found myself going well and as I had a camelback rather than bottled water I could drink on the go and didn’t need to stop for water breaks. I also found it easier to gain height and distance steadily. So I kept going: step, step, step, step and soon found myself well ahead. At about 11 am I stopped for a while to let Sangye, the temporary hoseman and the pack overtake and to take in the views. The horseman knew the way after all, although there really weren’t any route choices. Just upwards ever upwards.

As we had gained height through the morning while the view ahead remained hidden behind the ridge and its pass the vista behind grew from significant, through astounding to its present full-blown magnificence. Looking back I could trace our route over the past 3 days and took this photograph. Through the centre of the picture from foreground to middle ground the Kyalunpa Khola gorge cut like a jagged saw, its northern bank mostly in shadow and its southern bank in sunshine. At the far end of the gorge was the milder-looking Kali Gandaki valley where we had started from Kagbeni 3 days ago and before there, Jomsom 5 days ago. The mountains beyond were crowned with snow with the inviting cup of the Thorung La to the right. Returning to the foreground, at the bottom centre-left in an area of scrub I could just make out the Blue Shack which we had passed nearly 3 hours previously. Above it was the scrub-traversing track that led to the little gorge and beyond it perched Ghok on the next plateau. On the opposite (dark) side of the major gorge I could see the precipitous mountain-hugging track the we and the yaks had taken to reach Ghok from Pilling 2 days ago. Beyond that track, shown at the left-centre of the photograph on a plateau on the right-hand bank of the gorge was Pilling itself, identifiable from the extensive terracing and the gritty track sneaking over the escarpment into the distance. Utterly magnificent and likely to be the last time I would see it. 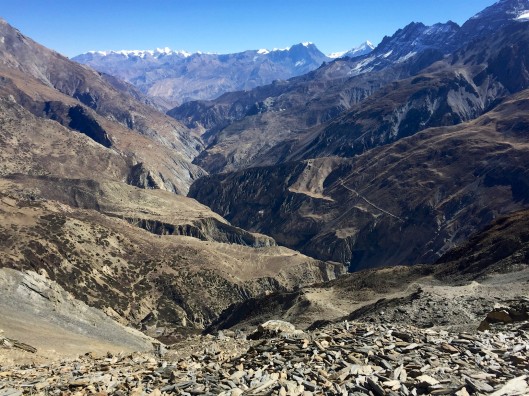 Looking back to the front I could see the last few metres to be climbed before reaching the pass. Sangye and the ponies were already over while Gyalbu and my mates were not yet in sight below. I had this extraordinary place to myself and with joy I strode to the top where the Jungben La was adorned with prayer flags and across into Dolpo. 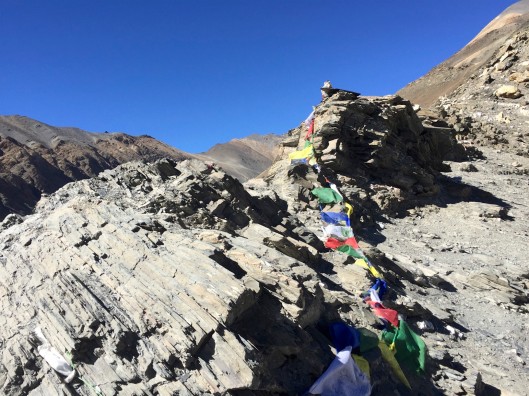 Thirty minutes and a couple of miles later I caught up with Sangye and the pony team, but only because they had stopped to prepare lunch beside the Bheri Khola which was mostly frozen. While Sangye prepared the food our temporary horseman was on the ice trying to fill our green bucket with water, which he did eventually. It was distinctly muddy and not ideal for consumption. I was glad I still had some of my own from Ghok. The track back to the Jungben La was distinct being a light sand colour against the darker rock of the mountain and that made it easy to spot the other trekkers when they appeared not long after. 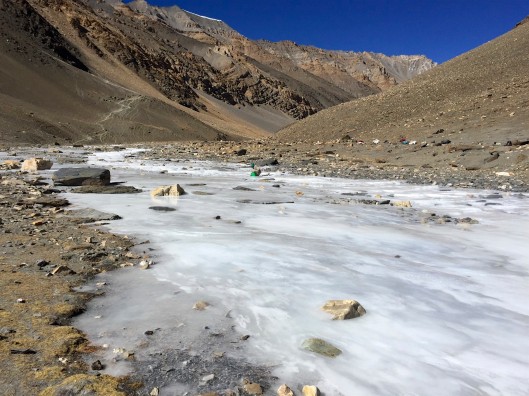 After our lunch of Wei Wei noodles at around 1 pm, hurriedly consumed as time was moving on and it was bitterly cold, we continued smartly west. Mark had been sick at lunchtime although he maintained it was due to bolting his food which was today particularly heavily laced with whole garlic cloves rather than any illness, and so it proved as there was no repeat.

Crossing our second high pass of the day, the 5120m (16,798ft) Niwas La at around 3:15 we instantly noticed a difference of vegetation. Gone now was the grey stone and grit of Mustang and in its place we found pasture, or at least what would be pasture if it was at a lower altitude in a warmer clime. The photograph below taken at around 4 pm shows that while the sky remained azure blue with not a cloud in sight, looking back the snow-capped mountains to the east were in sharp contrast to the gentler region in which we now found ourselves. 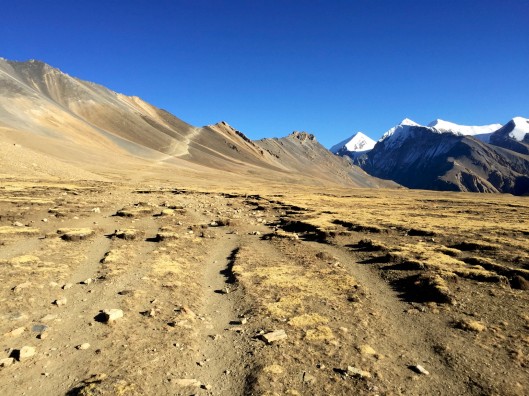 An hour later on this long hard day I once more found myself in the company of Sangye and the horseman with his string at Nulungsumda Kharka. This was the camp for the night marked only by a drafty but functional stone shelter on the desolate south-west bank of the Thasan Khola. At least we could prepare food inside, out of the biting wind. The pony and mules were unloaded and they were soon eating what little vegetation survived at this height while Sangye fetched water from the river. 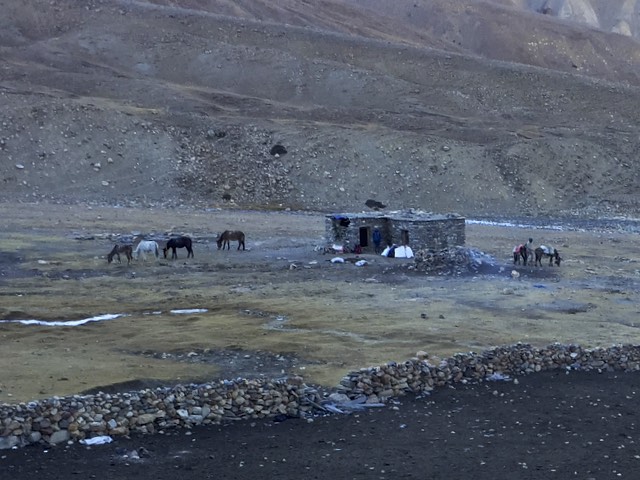 I quickly put up my tent and once the water was on to boil Sangye erected Lizzie’s. While together we set-up Jovi’s tent we mused that it was odd that we had seen no other trekkers or local people since leaving Ghok. It wasn’t that unusual not to see people going our way but not to see anyone at all going from west to east towards Kagbeni for a whole day was a first and we wondered why. During this speculation Tim arrived and between us we completed the remaining tents while the horseman fed his string. Shortly after dark Jovi, Mark and Lizzie came into camp with Gyalbu, unsurprisingly tired but delighted to find their tents ready.

Once kit was stowed we piled into the stone shelter and huddled together on the floor at one end for warmth, head-torches acting as a weak floodlight for Gyalbu and Sangye while they made tea. The main topic of conversation was food; more particularly food fantasy. Particlar items mentioned were a big meat pie and mushy peas (Lizzie), Jamie Oliver’s roast chicken breast stuffed with Roule cheese (Mark), a plate of Momos – Asian meat filled dumplings (Jovi) and (from me) a smoked salmon and cream cheese brown bread and butter sandwich. I think all of us were missing meat without bone and gristle – and we were still only in week 1! Then Tim proposed Dal Bhat, a Nepalese lentil curry, and amidst a howl of good natured derision he made Chinese chicken with rice from our ‘Look What We Found’ supplies that I had couriered to Jovi in advance of the trek. There was plenty of it and there were no bones. Delicious!

Following a (small) mug of Raksi which the amazing Gyalbu had brought from Ghok a tough day was brought to an end. Everyone was in their sleeping bag by 7:15. Under normal circumstances such an early night would be unthinkable but these circumstances weren’t normal. We were tired and it was very cold outside.

Tomorrow, with any luck, we shall be at Chharka Bhot, a village 600m lower but well over 20 miles away. Looks like another early start!